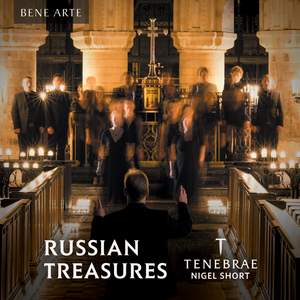 The authentic voice of Russian liturgical music is a challenge for Brits to emulate; there’s the unique timbre Church Slavonic an indefinable quality of melancholy and a visceral richness which... — Choir & Organ, January/February 2014 More…

Grechaninov: Now the Powers of Heaven

Rachmaninov: Blessed is the Man

Tchaikovsky: Legend (The Crown of Roses)

Recording of the Week,  Russian Choral Music from Tenebrae

Nigel Short directs his award-winning British vocal ensemble in a programme of ‘Russian Treasures’, including excerpts from Rachmaninov’s Vespers and little-known gems which are rarely performed outside Russia.

Russian Treasures is the 20th album from award-winning professional choir, Tenebrae, and the first release on new label Bene Arte, established exclusively to record the choir and associated artists. Russian choral music has been a feature in Tenebrae’s concert performances since the choir’s inception and over the years they have worked extensively with Russian language coaches whilst nurturing their own characteristics of passion and precision to deliver a special and heartfelt tribute to the music of these great composers.

This disc was inspired by the rare manuscripts collected by director Nigel Short during his travels around Russia. The exquisite collection includes some little-known gems, rarely heard outside Russia and never before recorded in the UK, as well as some familiar favourites from this vast area of choral repertoire. Award--winning Tenebrae has established itself as the chamber choir of choice for critics and audiences in the UK and around the world. Founded and directed by Nigel Short, the group blends the passion of a large Cathedral choir with the precision of a chamber ensemble to create a unique and enchanting sound, one which is as dazzlingly effective in mediaeval chant as it is in contemporary works. As the first ever group to be multi--nominated in the same category for the BBC Music Magazine Awards (2012), their recording of Victoria's Requiem secured the accolade for Best Choral Performance. Their recent recording of the Fauré Requiem with the London Symphony Orchestra was nominated for the 2013 Gramophone Awards, having been described as “the very best Fauré Requiem on disc”.

The authentic voice of Russian liturgical music is a challenge for Brits to emulate; there’s the unique timbre Church Slavonic an indefinable quality of melancholy and a visceral richness which only the real thing fully delivers.

Short lets the Znamenny chant that underpins so much of this music breathe freely, phrasing with improvisatory freshness and sense of discovery...If there is a quibble here, though, it's a disparity of tone and character through Short's choir. The basses are pure St Petersburg...while the sopranos are more St Peter's College, Oxbridge.

the fact that they don’t sound especially like a Russian choir I don’t see as a negative at all. What they bring to this music is their own refined passion, combined with precision, perfect balance and intonation. The upper voices have a purity and luminance, while the blended sound is smooth but never dull.

There is a distinctive timbre to this repertoire that Tenebrae catches to elevating effect. Your average Russian church choir would sing with more of an edge to the tone, but, on the other hand, this music was composed for choirs of top calibre. And Tenebrae is certainly one of those.

a beautifully blended, spaciously paced journey through late 19th and early 20th century Russian liturgical music. The basses are phenomenal, descending to their sepulchral bottom B flats; the tenors and sopranos sound a little too tidy and British at times, but the overall sound is gorgeous.