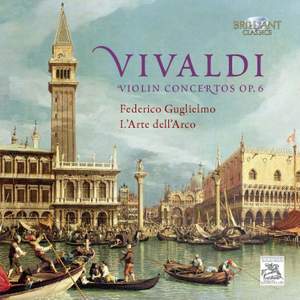 Vivaldi’s op.6 concertos first appeared in print in Amsterdam in 1719. However, this edition was unreliable in the extreme. Scoring was incorrect, the number of works indistinct, random movements separated from their correct work, and a host of other errors. What is clear though is that these concertos are a decisive step forward from the works found in opp. 3 and 4. For example, all follow the fast-slow-fast pattern of the three movement concerto. The solo violin has prominence, so we are moving away from the concerto-grosso style. These recordings are the world premiere of the new critical edition by Alessandro Borin, Istituto Italiano Antonio Vivaldi, Fondazione Giorgio Cini, Venice.

These performances of Vivaldi’s violins concertos Op. 6 are a far cry from the elegant and charming performances of past generations: played on period instruments Vivaldi sounds powerful, vibrant, full of passion and drama.

The “one player per part” formation is based on recent research by English scholar Richard Maunder, and provide a close, immediate sound, as it might have been heard in a Venetian Palace. This release is the first of a prestigious Vivaldi project: the complete Opp. 1-12 concertos played by L’Arte dell’Arco, conducted and played by Federico Guglielmo!