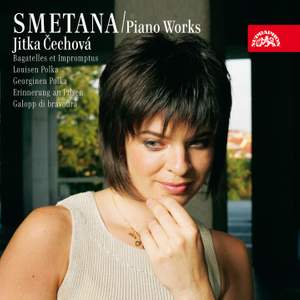 Cechová certainly understands this repertoire and she pays due respect to Smetana's youthful efforts. Throughout this volatile repertoire, her virtuosity is impressive and she clearly commands... — BBC Music Magazine, December 2011, 4 out of 5 stars More…

Gallopp in D major for Piano

Memory of Plzen (Erinnerung an Pilsen)

Impromptu in B minor

Impromptu in A flat major

Quadrille in B flat major

The fifth CD of the complete piano works of Bedřich Smetana (1824-1884) takes us back to the world of the composer’s student years. (Smetana wrote all the featured - and surprisingly mature - pieces before he had reached the age of twenty.) He introduces himself as a passionate dancer; the polkas, so typical of Smetana, as well as gallopades, waltzes and quadrilles, bear witness to the hectic social and musical life he led during his studies in Prague and Plzeň, where he was a sought-after pianist and was able to intensively develop his talent.

The first preserved composition is the Louisen Polka, followed by the Georginen Polka and Aus dem Studentenleben (From Student Life). The three Impromptus (1841-42) and Bagatelles et Impromptus (1844) are the first attempts to create compositions of a more serious nature and reflect Smetana’s inspiration by his musical idols (Chopin, Liszt, Schumann).

Even though young and a self-taught pianist, these early works reveal Smetana as a singular and inspired composer. The dancelike vigour and simple tenderness of these miniatures are rendered by the energetic pianist Jitka Čechová with an admirable naturalness and grace. Jitka Čechová discovers Bedřich Smetana’s early piano works on our behalf.

Cechová certainly understands this repertoire and she pays due respect to Smetana's youthful efforts. Throughout this volatile repertoire, her virtuosity is impressive and she clearly commands a Romantic tone...The recorded sound is on the hard side, but this is certainly a very collectable issue.

it is always melodious and as music to unwind to it has much to recommend it, not least Supraphon's good, solid audio and Čechová's attractively romantic pianism.