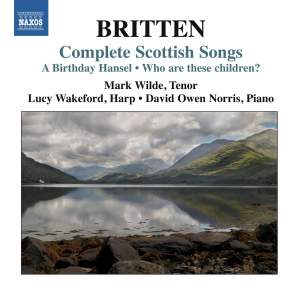 The Scottish tenor has matured into one of our finest artists with time's passing, musically astute, vocally impressive and a generous communicator...the intense beauty of Wilde's lyric voice... — Classic FM Magazine, October 2011, More…

Britten: Who are these children?, Op. 84

No. 9. Who are these Children?

No. 7. Come you not from Newcastle?

Steeped in an atmosphere of ancient Scottish musical tradition, Benjamin Britten’s setting of texts by Robert Burns in A Birthday Hansel was his final song-cycle. Who are these children? is another late cycle to poems by William Soutar, combining darkly dramatic musical depictions of wartime life with protest songs which hark back to the composer’s youth.

The Scottish tenor has matured into one of our finest artists with time's passing, musically astute, vocally impressive and a generous communicator...the intense beauty of Wilde's lyric voice and the musical wisdom of these interpretations pay handsome compensation for the recital's want of spectacular contrasts.

[In "A Birthday Hansel"] Wilde takes his time and uses his pliable voice to play with light and shade in atmospheric performances. The Soutar cycle, "Who are these children?", is also unhurried, adding several minutes to the timing of Peter Pears's recording, though Wilde generally uses the time productively. The headlong violence of "Slaughter" is more intelligible at this speed and "The Children" has a properly haunting air.

This is a fascinating recital of all Britten’s “north of the border” settings, including his final song cycle A Birthday Hansel and familiar folk-songs such as Ca’the Yowes. The mood is mostly bleak, haunted and haunting: this is Britten at his most austerely romantic and melancholy.