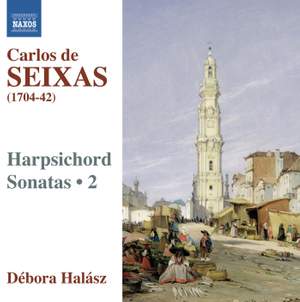 Seixas: Keyboard Sonata No. 60 in A major

Seixas: Keyboard Sonata No. 65 in A minor

Seixas: Keyboard Sonata No. 78 in B flat major

Seixas: Keyboard Sonata No. 58 in A major

José Antonio Carlos de Seixas shared a common keyboard tradition with his contemporary and colleague Domenico Scarlatti, and the question as to who most influenced the other remains unanswered. De Seixas absorbed and combined Italian influences with the musical traditions of Spain and Portugal to create spectacular sonatas filled with grand gestures and remarkable virtuoso effects. Volume one of this series (8557459) was described as an “unusually satisfying disc of Baroque keyboard music, packed with real thrills” (All Music Guide).