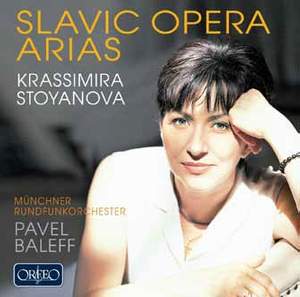 Stoyanova's solid technique and distinctive ability to characterise more through vocal intensity than colour suits a repertoire which constitutes a guide to Slavic melancholy...the version of... — Gramophone Magazine, January 2012 More…

Although she came to international prominence in Italian and French operas, Krassimira Stoyanova is equally at home in the Slav repertoire, a point well illustrated by her European successes as Xenia in Dvořák’s Dimitri under Sir Richard Hickox and by last year’s triumphant performances as Rusalka at the Zurich Opera.

She has also appeared frequently in one of the most famous rôles in Russian opera: Tatyana in Tchaikovsky’s Eugene Onegin. All of which is a good enough reason to present scenes from all these works as part of her new recital for Orfeo, an album in which she appears with the Munich Radio Orchestra under Pavel Baleff.

This varied compilation also includes such rarities as Parashkev Hadjiev’s Maria Desislava and Veselin Stoyanov’s Hitar Petar, two operas from Stoyanova's Bulgarian homeland. Both are 20th-century works, and the soprano arias that are taken from them reveal a high degree of originality in their handling of the orchestra and their melodic writing. With every breath Stoyanova brings out all the elegance, beauty and radiant colour of these two very different pieces. Maria’s lullaby from Mazeppa provides a tragic and profoundly affecting dénouement to the action and is sung with the requisite simplicity, making its impact all the more intense. The same may be said of Mařenka in Smetana’s The Bartered Bride, whilst Lisa’s aria from The Queen of Spades, reveals all its dramatic potential. Finally, Krassimira Stoyanova displays her world-class credentials in scenes from Prince Igor and from Rimsky-Korsakov’s The Snow Maiden and The Tsar’s Bride, allowing her uniquely varied vocal facets to flash like diamonds, while building to an impressive climax.

Stoyanova's solid technique and distinctive ability to characterise more through vocal intensity than colour suits a repertoire which constitutes a guide to Slavic melancholy...the version of the Onegin Letter Scene with which she begins this disc has needlepoint accuracy and a well-scanned emotional range...Stoyanova truly has the grand style, both in fearless voice and dramatic impersonation.

all the shades of [Tatyana's] feelings are caught and transmitted by Stoyanova in splendid voice...To enjoy the lusher sound of her voice in more outgoing music, listen to the warmth of her performance of the aria from The Bartered Bride or to the more dramatic outburst of the disillusioned Rusalka.