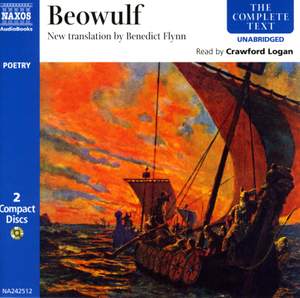 So those warrior Scyldings passed their lives

The hour came. The ship rode the flood in close

They turned to leave: the ship waited anchored …

A bench was cleared for the Geats in the hall

There was laughter then, and the din resounded …

Meanwhile the Danes raced their mounts …

The Dane's chief went on to reward the others.

This was the lay, the song of the poet,

Hrothgar spoke, protector of the Scyldings:

They all gazed at the hot gore surging up

A radiance appeared and a light streamed in

Then the warriors hastened, keen to return …

But, my tale is what happened with Grendel …'

Beowulf heard the news of the terror,

Beowulf the brave king sat on the windy headland.

The fatal wound inflicted by the earth-scorcher began

What happened brought to nought the hope of one

The oldest long poem in Old English, written about 1000 A.D., Beowulf tells the story of a great warrior in Southern Scandinavia in both youth and maturity. The monster Grendel terrorises the Scyldings of Hrothgar’s Danish Kingdom until Beowulf defeats him. As a result he has to face her enraged mother. Beowulf dies after a battle against a fierce dragon. The tale is powerfully performed here by Crawford Logan in a lively modern translation from the original West Saxon dialect.