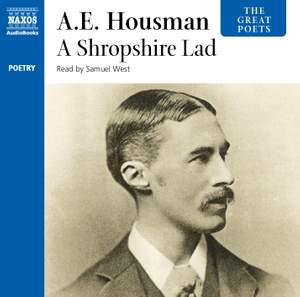 1887 From Clee to heaven the beacon burns

Loveliest of trees, the cherry now

THE RECRUIT: Leave your home behind, lad

When the lad for longing sighs

When smoke stood up from Ludlow

'Farewell to barn and stack and tree'

On moonlit heath and lonesome bank

MARCH: The sun at noon to higher air

On your midnight pallet lying

When I watch the living meet

When I was one-and-twenty

There pass the careless people

Look not in my eyes, for fear

It nods and curtseys and recovers

Twice a week the winter thorough

Oh, when I was in love with you

TO AN ATHLETE DYING YOUNG

BREDON HILL: In summertime on Bredon

The street sounds to the soldiers' tread

Say, lad, have you things to do?

This time of year a twelvemonth past

Along the fields as we came by

'Is my team ploughing'

THE WELSH MARCHES: High the vanes of Shrewsbury gleam

THE LENT LILY: 'Tis spring; come out to ramble

Others, I am not the first

On Wenlock Edge the wood's in trouble

From far, from eve and morning

If truth in hearts that perish

On the idle hill of summer

White in the moon the long road lies

As through the wild green hills of Wyre

The winds out of the west land blow

Into my heart an air that kills

In my own shire, if I was sad

THE MERRY GUIDE: Once in the wind of morning

THE IMMORTAL PART: When I meet the morning beam

Shot? so quick, so clean an ending?

If it chance your eye offend you

Bring, in this timeless grave to throw

THE CARPENTER'S SON: 'Here the hangman stops his cart'

Be still, my soul, be still; the arms you bear are brittle

Clunton and Clunbury, Clungunford and Clun

Loitering with a vacant eye

Far in a western brookland

THE TRUE LOVER: The lad came to the door at night

With rue my heart is laden

Westward on the high-hilled plains

THE DAY OF BATTLE: 'Far I hear the bugle blow'

You smile upon your friend to-day

When I came last to Ludlow

THE ISLE OF PORTLAND: The star-filled seas are smooth to-night

'Terence, this is stupid stuff'

I Hoed and trenched and weeded

In A Shropshire Lad, A. E. Housman recreates a nostalgic world of lost love, lost youth, thwarted friendships, unfaithful girls, male bonding, untimely death and the uncertain glories of being a soldier. The poems deal with the exuberance of youth – its aspirations and disappointments, its naïve certainties and tragic mistakes. Though written in 1895, it struck a chord with the generation of young men who fought in World War I. It was said that every ‘Tommy’ had a copy in his knapsack. It has never been out of print.