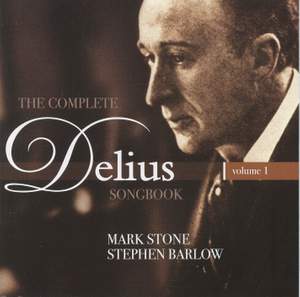 Mark Stone is full and strong across his range, if lacking in variety. His diction is a model of clarity. Stephen Barlow partners him capably and sympathetically, though some of Delius's more... — BBC Music Magazine, October 2011 More…

Delius: Seven Songs from the Norwegian

No. 2. The Homeward Journey

No. 3. Spring, the sweet spring

No. 1. Over the mountain

Delius: They are not long, the weeping and the laughter

2 Songs for Children: No. 1. Little Birdie

Delius: The nightingale has a lyre of gold

No. 2. I once had a newly cut willow pipe

Delius: 5 Songs from the Norwegian

Celebrating the 150th anniversary of the composer’s birth, this is part one of a two disc series which will comprise the first complete recording of the songs of Frederick Delius. It features a number of world première recordings. Mark Stone and Stephen Barlow’s Butterworth collection (5060192780024) received great critical acclaim “exquisitely performed” Classic FM Magazine.

Mark Stone is full and strong across his range, if lacking in variety. His diction is a model of clarity. Stephen Barlow partners him capably and sympathetically, though some of Delius's more complex pianistic effects would have benefited from a less close-up recording...But lovers of Delius's music should snap up this disc.

I've been critical of Mark Stone's use of big primary colours in subtle English songs in the past, but found his approach to Delius far more persuasive, rich in nuance, sensual contrasts of colour and range of textual expression...The partnership between singer and pianist, tested many times in concert and the recording studio, is one of give and take, collectively eloquent and ideally committed to extracting the essence of each song.

The remarkable thing about this first volume of the collected Delius songs, quite apart from the quality of Mark Stone's singing, is that so few of them are identifiable as the work of Delius...Stone has a remarkable voice, firm and finely focused, which he uses seductively over the widest dynamic and expressive range. His singing is ideally matched by the piano-playing of Stephen Barlow, the whole cleanly and clearly recorded, a credit to Stone Records.

The baritone's tone is warm and rich without ever becoming fruity and, when Delius rises to an impassioned climax...Stone produces a noble flood of sound that is truly impressive...full texts are given in English and, where appropriate, in their Norwegian originals...Not that even the English is really necessary, as Stone's diction is so exemplary.

The highlights here are the Four Old English Lyrics, to words by Shakespeare and Ben Jonson, among others, in which Stone’s engagingly natural style and immaculate diction are supported by Barlow’s sympathetic playing.