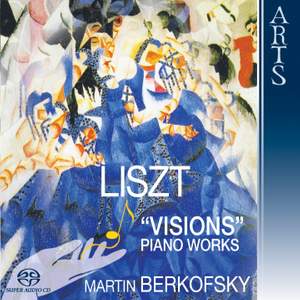 On a new Hybrid SACD the celebrated American pianist Martin Berkofsky performs a fascinating selection of works for solo piano by Franz Liszt including the Étude d’exécution transcendante Nos. 7 and 11, the Hungarian Rhapsody No. 12, and the Pater Noster from Harmonies poétiques et religieuses S 173.

The pianist Martin Berkofsky was born in 1943 in Washington, D.C. but is of Belarussian ancestry. He is known primarily for his interpretations of the music of Franz Liszt and Alan Hovhaness, and has performed extensively throughout Europe as well as in Turkey and Armenia. In 1971 he met the composer Alan Hovhaness when he performed one of the composer's works, and many Hovhaness performances followed. Hovhaness gave many newly-composed and unrecorded scores to Berkofsky who over the next decades recorded a number of discs of his music. He has made numerous recordings for major labels including Sanctuary/Black Box, Koch International, Crystal, Vox, Nimbus, and Angel.

As a performer Martin Berkofsky feels particularly at ease with the poetic world of Liszt. For him playing Liszt is almost an experience of mystic contemplation. The numerous, often radical changes that he makes to the original text should therefore be seen in this light since what counts most for him is not the notes in themselves, but the space that lies between them.