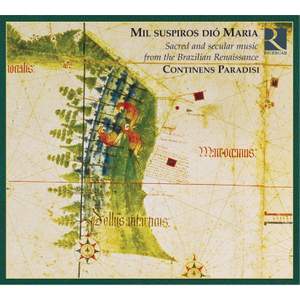 Sacred and Secular Music from the Brazilian Renaissance

The Jesuit brother Jos de Anchieta arrived in Brazil in 1553. He did all that was possible to save the souls of the savage inhabitants whilst simultaneously endeavouring to guarantee their devotion to the Church and to the King of Portugal.

This recording is intended to introduce the music that was heard in Brazil during the second half of the 16th century. A good number of the pieces recorded here have their origins in religious texts that were collected by Anchieta; these replaced the secular texts in songs that are typically Iberian in character. What is more, the Jesuits hoped that the Tupi Indians would be moved by the Christian faith if they could sing Catholic hymns translated into their language.

This CD is an absolute premiere, and lets us discover both early South-American music and a fascinating page of history.