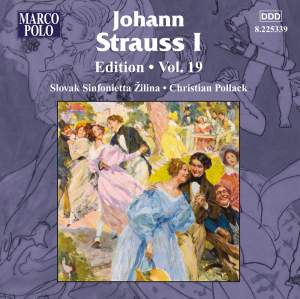 With their melodic richness, sparkling instrumentation, originality of invention and irresistible momentum, Johann Strauss the Elder’s compositions of 1845-46 are among his most memorable. His waltzes and quadrilles were heard in some of the grandest Viennese ballrooms (one with 6,000 candles) and excited admiration from dancers and critics alike.

Robert Schumann said of the Concordia Dances that they were “real foot-waltzes, to which everything surges and jumps”. Whether writing for benefit concerts for victims of the “Saxon Flood” – Merry Pictures of Life was received with “hurricane-like applause” – or basing his themes on Flotow’s opera Alessandro Stradella, Strauss possessed such an inexhaustible and unrivalled mastery of the waltz that each new work was greeted by his adoring public as his best.