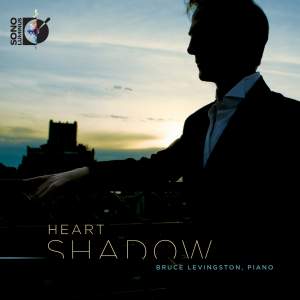 Combining the best of the old and new with world premiere recordings, Sono Luminus is proud to announce the first of three upcoming albums from world renowned pianist Bruce Levingston. Levingston has created programs inspired by literature, the elemental aspects of light and dark, and the power of intimate sound.

The CD Heart Shadow contains three major piano works inspired by literature of the nineteenth and twentieth centuries including world premiere recordings of works by two of the most outstanding composers of our time: Rome Prizewinner Lisa Bielawa and Pulitzer Prize-winner Charles Wuorinen. The inspiration for Bielawa’s sweeping and emotionally charged “Elegy-Portrait” comes from a work of Rainer Maria Rilke; Wuorinen’s deeply touching and introspective “Heart Shadow” derives its genesis through by a novella by Salman Rushdie. These exquisitely wrought and powerful new works, both written by leading composers of their generation, are heard alongside Robert Schumann’s brilliant and beloved masterpiece, “Kreisleriana”, a work also inspired by the world of letters, E.T. A. Hoffmann’s magical Katur Murr. Heard together, in elegant and richly colored interpretations by pianist Bruce Levingston, these three dark and magnificent piano works reflect the deep influences that great music and writing continue to have upon one another.

Pianist Bruce Levingston is one of today’s leading figures in contemporary music. Many of the world’s most important composers have written works for him and his world premiere performances of their works Carnegie Hall and Lincoln Center have won notable critical acclaim. The New Yorker describes him as ““elegant and engaging”, “a poetic pianist who has a gift for inventive— and glamorous— programming”, while The New York Times calls his performances ““graceful”, “dreamy” and “hauntingly serene”.

Mr. Levingston has appeared as a soloist and chamber musician in concerts and music festivals throughout the world and his performances have been broadcast internationally on radio and television. His CD Portraits received high critical praise. Classics Today lauded his ““transcendent virtuosity” and “huge arsenal of tone color”” while Klassic Magazin noted his “warm playing, deep understanding and intimate, richly colored sound.” He is founder and artistic director of Premiere Commission, Inc., a non profit foundation that has commissioned and premiered over forty new works.

With these world premiere performances and Levingston’s stellar interpretation of the classics combined with the extremely well thought out programs, this and the albums to follow are sure to be treasures for piano enthusiasts, classical music lovers, new music aficionados, and the general listening public. The subsequent albums will follow in October and January. The October release, NIGHT BREAK (Liszt, Brahms, Rhim, Glass), will feature works of light and dark with a world premiere recording of Phillip Glass’ “Dracula Suite” transcribed by Bruce Levingston with Philip Glass’ supervision. The January release STILL SOUND (Pärt, Satie, Gross, Schubert, Chopin, Bolcom) is an album of intimate works featuring world premiere recordings of Pulitzer Prize-winner William Bolcom’s “New York Lights” written for Bruce Levingston, and Augusta Gross’ new works inspired by Satie and Pärt.