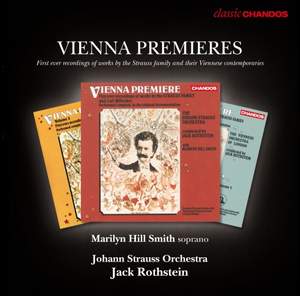 Perhaps no composer is more associated with a city than Johann Strauss II with Vienna. Indeed it is hard to consider Vienna without thinking of the waltz, and the waltz empire is dominated by the Strauss family. Johann Strauss I & II, Josef Strauss, and Eduard Strauss produced a seemingly inexhaustible supply of melodies which have entranced not only the dancers of the world, but also its musicians and music-lovers from the 1840s to the present. Whilst much of their music has never been out of the recorded repertoire, so prolific was their output that a quantity of top-rate music was forgotten over the years.

Jack Rothstein recorded three volumes of such rarities in the 1980s and ’90s, which comprised music by the Strauss family and their contemporaries. So enjoyable and tuneful are these ‘Vienna Premieres’ that it is impossible to understand just why they had been neglected. Time and time again one is amazed at the un-flagging inspiration which seemed to come so easily to composers of this period, who produced consistently high-quality light, entertaining music, beautifully crafted and orchestrated. Jack Rothstein was a master of this music. Appointed Musical Director of the Johann Strauss Orchestra in 1976, he was steeped in the distinctive performing style associated with this repertoire for years before making the pioneering digital recordings collected here. It is the first time that these three unique CDs have been gathered together in one convenient and inexpensive box.