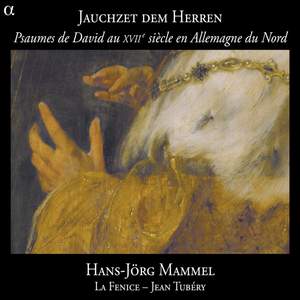 The Psalms of David in 17th Century Northern Germany

this release focuses on 17th-century north German psalm-settings for tenor and ensemble. If that sounds rather earnest, the idea is quickly dispelled by the opening track, Buxtehude's Dixit Dominus,... — Gramophone Magazine, November 2011 More…

After the Thirty Years War, a brilliant musical culture was able to flourish in the churches of Northern Germany. Organists such as Buxtehude, Scheidemann, Bruhns or Sommer, started to compose their own works. This new musical culture in the North of Germany fundamentally differed from what was going on in the Center or the South of the country.

In these regions there remained a scholarly and speculative conception of music, inspired by the humanist spirit of the Reformation. On the shores of the Baltic and North seas it was the prosperous Hanseatic League which considerably influenced musical life.

Aristocrats and burghers insisted that the members of local chapels should be allowed to practice their art, like the organists and musicians attached to the service of the different towns. Thus a generation of musicians was born. Assembled on this disc, their music probably never achieved the recognition it deserved.

this release focuses on 17th-century north German psalm-settings for tenor and ensemble. If that sounds rather earnest, the idea is quickly dispelled by the opening track, Buxtehude's Dixit Dominus, delivered as a joyous clamour of voice, strings and harpsichord with a lusty bassoon adding both weight and definition. That this is a surprisingly vivid programme is partly because of the colour offer by combination of winds and strings

No criticism can be levelled at the playing of Jean Tubéry's La Fenice. Its contributions to the vocal works, whose prominent instrumental parts play a vital role in their expressive force, are supremely intelligent and refined...As customary with Alpha recordings, the sound is at once luminously clear and warm, as is the sumptuously reproduced artwork on the cover.