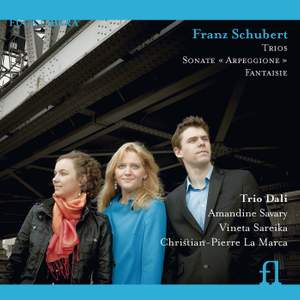 this new set of Schubert's piano trios is a real discovery from three young players with plenty to say and the most compelling manner of saying it...[it] has a joyous sense of energy from the... — Gramophone Magazine, October 2011 More…

In their first CD already (Maurice Ravel, chamber music – Fuga Libera FUG547 – Diapason d’Or, CHOC of the year 2009 in Classica), the Dali trio has shown a remarkable balance between the impulsiveness of youth, a superior technique and the maturity acquired with the best masters – Augustin Dumay, Abdel Rahman El Bacha, the Artemis Quartet– at Chapelle Musicale Reine Elisabeth.

The individual qualities of its three members enable them to take on sonatas just as effectively as trios. This is the format adopted here in another summit of chamber music, Schubert’s two piano trios and the two traditional stumbling blocks for violinists, cellists and pianists: the Arpeggione and the Fantasy in C major.

If the Arpeggione, marvelously interpreted here, is not a rarely played piece, the Fantasy on the other hand certainly is : discarded from most recitals because of its difficulty, this masterpiece had however been written in December 1827, straight after the Trio in E flat ! This double album, recorded once again in the magical Studio 4 at Flagey in Brussels, ought to demonstrate that the Dali are now definitely playing in the best league.

this new set of Schubert's piano trios is a real discovery from three young players with plenty to say and the most compelling manner of saying it...[it] has a joyous sense of energy from the off. The recording is beautifully balanced, with the piano never unduly forward in the texture and a particular delight is the way the players melds Schubert's countermelodies to sensitively.