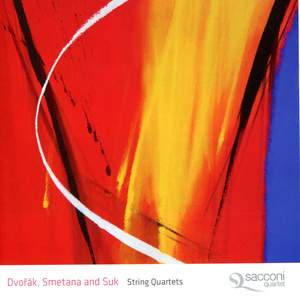 The distinctive and passionate sound of Romantic Czech music is gloriously showcased in this new disc by the Sacconi Quartet. The new recording is released on the Quartetʼs own label, Sacconi Records. It contains works by three prodigious Bohemian composers all of whom were featured in the outstanding 2010 Sacconi Chamber Music Festival in Folkestone, entitled ʻTales of Bohemiaʼ.

The Meditation on the Old Czech Hymn, Saint Wenceslas by Josef Suk is a largely undiscovered gem; a work of great power and presence. Suk, the student and later son-in-law of Antonín Dvořák, wrote the short, hauntingly beautiful piece at the outbreak of the First World War.

Bedřich Smetanaʼs String Quartet No. 1 in E minor, From My Life is one of the great autobiographical works. Written at the end of the composerʼs life when he was completely deaf, it is a deeply personal work reflecting a life tinged with tragedy and sadness.

The String Quartet No. 12 in F major, opus 96, American by Antonín Dvořák is a wonderful work full of soul as well as joyous themes. It is firmly established as one of the best-loved quartets in the repertoire.

The Sacconi Quartet is one of the UK's leading string quartets. Since its formation at the Royal College of Music in 2001, it has established a secure and substantial reputation. The Quartet is recognised for its unanimous and compelling ensemble, performing with style and commitment and consistently communicating with a fresh and imaginative approach.

Its four founder members demonstrate a shared passion for string quartet repertoire, infectiously reaching out to audiences with their energy and enthusiasm. Over the past decade they have enjoyed a highly successful international career, performing regularly throughout Europe, at Londonʼs major venues, in recordings and radio broadcasts.

The Sacconi Quartet's performance, aided by a rich recorded sound, is ideal: quietly intense without resorting to sentimentality...There is clear relish for the American's abundant lyricism...their performance of the Scherzo captures its volatile ebb and flow delightfully, and the finale certainly has the requisite levels of energy.

This Czech programme suits the infectious bounce and fizz of the Sacconis, who bring Dvořák's songful "American" quartet to vivid life and drive along the dance-like second movement of Smetana's Quartet No 1 with an irrepressible swing. But it's not all party hats and streamers...the sensitive Sacconis bear solemn witness to [Smetana's] sorrowful journey into silence. Equally, they create a reverential stillness in Suk's Meditation on an Old Czech Hymn

The Sacconi, a fast-rising British string quartet, bravely tackle Czech masterpieces recorded many times before, and bring something fresh and distinctive. Dvorák’s American Quartet has a light touch and springy rhythms that suit the music perfectly.