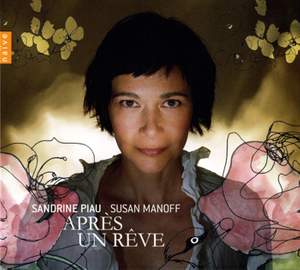 This celebration of dreams and childhood is, on the purely sensuous level, an unending delight. Piau's sweet, unforced tone, her bright top notes perfectly integrated with her medium and exemplary... — BBC Music Magazine, July 2011, 4 out of 5 stars More…

2 Romances: No. 2. Sun of the Sleepless (Schlafloser Augen Leuchte)

Tom Bowling and Other Song Arrangements: No. 6. I wonder as I wander

The award-winning pairing of soprano Sandrine Piau and pianist Susan Manoff received unanimous critical acclaim for their previous recital disc Evocation, (V5063). On their new CD Après un rêve they perform a fascinating collection of songs by some of the greatest composers for the voice of the 19th and 20th centuries, including Richard Strauss, Fauré, Mendelssohn, Chausson, Poulenc, Britten and Vincent Bouchot.

After initially making her reputation in Baroque music alongside the likes of William Christie, Philippe Herreweghe, Christophe Rousset, and René Jacobs, Sandrine Piau now sings a broad repertoire reflected in her large discography. and she has now confirmed her position at the forefront of the new generation of French singers. Her Handel album with Christophe Rousset and Les Talens Lyriques (E8928), was an Editor’s Choice in Gramophone, and in 2007 she released an award-winning recital CD entitled Évocation (V5063), on which she was accompanied by the pianist Susan Manoff. Après un rêve demonstrates once again the strength of her musical relationship with Manoff, with whom she appears regularly at venues like the Carnegie Hall and the Wigmore Hall. Her solo discography for Naïve also includes a programme of Mozart opera arias with the Freiburger Barockorchester (V4932), and two recent bestselling Handel albums, duets with Sara Mingardo directed by Rinaldo Alessandrini (OP30483) and the solo album Between Heaven and Earth with Accademia Bizantina (OP30484).

This celebration of dreams and childhood is, on the purely sensuous level, an unending delight. Piau's sweet, unforced tone, her bright top notes perfectly integrated with her medium and exemplary diction combine to make this in many ways yet another exmaple of how well Baroque vocal technique translates into the later song repertoire.

Piau's exquisite voice has a limpid quality all through its range, an evennes of tone which seduces the ear and - art concealing art - she makes her performance sound as easy as breathing...Bouchot's Galgenlieder songs,m with their skewed harmonies, off-centre melodies and dark fairy-tale lyrics, are a fascinating addition to the repertoire too, and Manoff's accompanying is a treat.

surrender to Piau's gifts as a singer, the purity of her tone, with that light silvery quality that we should associate with the best of the French style, and the effortless, so it seems, spinning of a seamless legato...Everything is grist to her mill, it seems, even Britten's most English songs that she delivers with immaculate diction while sounding completely at home in a second language...this is a sophisticated and a fine artist at work.

there's exquisite playing from Susan Manoff, and no mistaking the beauty of Piau's voice, or her hypnotic way with words. This is singing that sends shivers down your spine.

It's a journey whose darkest depths are reached by Vincent Bouchot's use of Morgenstern's Galgenlieder (Gallow Songs), in which are encountered more surreal images – notably the inhabitants of the moon depicted "show[ing] their teeth to the sulphurous hyena" in "Moonthings".