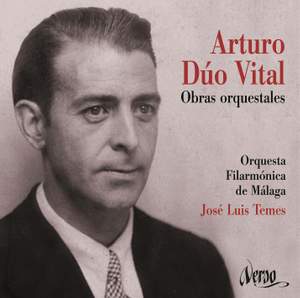 Although sidelined by traditional Spanish forgetfulness and apathy toward things Spanish, the output of Arturo Dúo Vital from Cantabria (Castro Urdiales, 1901-1964) is one of the finest illustrations of the so-called Silver Generation, also the Broken Generation or the Generation of the Republic. Trained in the land of his birth and after working for several years in banking, in 1932 he moved to Paris to extend his experience at the hands of Paul Dukas in two courses at the École Normale de Musique. It was indeed in France where he premiered his first orchestral compositions, of which just some literary references remain. Back in Spain and after suffering the hardships of the Civil War, he held posts as conductor of various orchestras, alternating until his death with that of lecturer in the Royal Senior Conservatory of Music of Madrid.

This Verso recording offers for the first time the complete preserved orchestral output of Dúo Vital, three splendid works over a very broad chronological period, from 1932 to 1960, in which it is easy to see the composer’s evolution in writing for orchestral masses. These fine versions, by the Málaga Philharmonic Orchestra under José Luis Temes, and the results encountered on this disc confirm the need for rehabilitation in recording form which, it may be hoped, should take shape in new issues very soon. Also notable has been the recovery work by Temes, recent winner of the National Music Prize, who has in recent years become one of the main promoters of the least-known Spanish musical heritage.