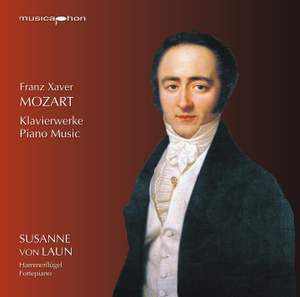 No. 4 in G minor: Allegretto moderato

No. 2. Polonaise elegante in C major

Franz Xaver Mozart was born the 21st September 1791 in Vienna, the sixth child of Constanze and Wolfgang Amadeus Mozart. A few month after his birth his father died. Franz Xaver looked like his father and Constanze called him Wolfgang. Later his music was published under the name of "Wolfgang Amadeus Mozart, son, fils or figlio". Constanze very early recognized the musical talent of her youngest son and sent him to the most distinguished teachers including Salieri and Albrechtsberger, who had been the mentors of Ludwig van Beethoven. Franz Xaver Mozart studied piano with Johann Nepomuk Hummel, a former pupil of his father. The first composition published in 1805 was the "Quartet g minor" composed two years earlier. His compositions however would not achieve as great a success as his piano playing.

From 1819 until 1821 Franz Xaver toured as a concert pianist through the German speaking part of Europe and Denmark, Russia and Italy. 1838 he finally came back to Vienna. 1842 on his last appearance he played the d-minor piano concerto KV 499 of his father in celebration of the unveiling of the Mozart memorial in Salzburg. Fifty three years old Franz Xaver Mozart died the 29th July 1844 in Karlsbad.