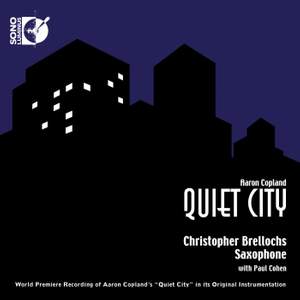 During his doctoral studies Brellochs obtained a copy of the unpublished manuscript to Quiet City from saxophonist and historian Paul Cohen. The score was handwritten by Copland, included cues and actor’s lines, and called for a chamber ensemble of trumpet, saxophone (doubling on clarinet), clarinet (doubling on bass clarinet), and piano. Here was never before heard music of the highest quality, by an iconic American composer.

Brellochs was granted the exclusive right to record and perform his newly reconstructed chamber adaptation of “Quiet City” by Boosey & Hawkes and The Aaron Copland Fund for Music. This unique opportunity to make a world premiere recording has lead to a search for other unrecorded works by American composers. The results of that search include the whirlwind composition “Sound Moves Blues” by Robert Aldridge, the charming “Suite for Trumpet, Alto Saxophone, and Piano” by Seymour Barab and the invitation to guest artist Paul Cohen to contribute previously unreleased recordings of works by Leo Ornstein, Walter Hartley and Lawson Lunde. Every work on Quiet City features world premiere recordings of prominent American composers.

Saxophonist, composer and arranger Christopher Brellochs has performed at Carnegie Hall and in solo recitals throughout the Northeast, as well as the 32nd International Saxophone Symposium. He was a recent guest artist and lecturer with the Poné Ensemble at SUNY New Paltz (2010) performing his new adaptation of Copland’s “Quiet City”.

Brellochs has lectured at the Manhattan School of Music and a College Music Society Conference on the topics “Benjamin Britten and the Saxophone” and “Aaron Copland and the Saxophone”. His article, “Aaron Copland’s Use of the Saxophone in Wind Band Repertoire,” was published in the Journal of the World Association for Symphonic Bands and Ensembles. Paul Cohen (saxophone) has appeared as soloist with the San Francisco Symphony, Richmond Symphony, New Jersey Symphony, Charleston Symphony and Philharmonia Virtuosi. Cohen’s recent concerts included an Artist - in Residency at the Royal College of Music and Dance in Cardiff, Wales as well as performances at Carnegie Hall, the Metropolitan Museum of Art and other stages with the New York Philharmonic, New Hudson Saxophone Quartet and the Manhattan Sinfonietta.

This release is sure to be a favorite with fans of the saxaphone and new music, as well as a spectacular addition to the collection of enthusiasts of the works of Copland.