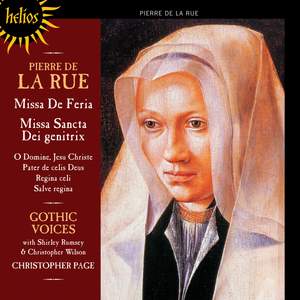 While most of us might regard Pierre de La Rue as a composer of ‘early’ music, for Dr Page and his Gothic Voices this is bordering on the avant garde: this recording represents a leap forward a century from the group’s more accustomed repertoire, and the results are impressive to say the least.

La Rue was remarkably prolific; at least twenty-nine Masses can be ascribed to him with confidence, and the Missa De Feria and Missa Sancta Dei genitrix are among the finest. His music is full of imitation, a sense of choreography, and is coloured by a fondness for particularly low registers.

In addition to the two Masses, this disc includes the large-scale Pater de celis Deus, arguably the grandest of La Rue’s motets and a work full of counterpoint in its three-part, six-voice canon, and three other motets performed as lute intabulations in editions specially prepared for this recording by Christopher Wilson.

A revelation, not only of top-rate neglected music, but also how it should sound. A perfect marriage of musical style and scholarship. Insight and enjoyment hand in hand