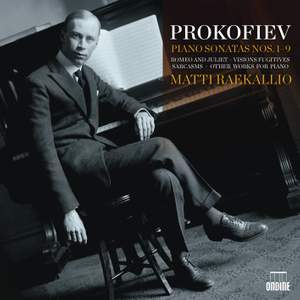 Formidably played and well recorded, it will alert even the most seasoned listener to the conflicting elements of Prokofiev's always "difficult", prickly and volatile nature...[Raekallio] plays... — Gramophone Magazine, October 2011 More…

No. 4. The Little Girl Juliet

No. 9. Dance of the Antilles' Girls

No. 10. Romeo and Juliet Before Parting

This 4-CD collector’s box features Matti Raekallio with piano solo music by Sergei Prokofiev, including a complete set of the nine Piano Sonatas.

Finnish-born pianist Matti Raekallio has built an international reputation particularly upon his reference interpretations of Prokofiev’s piano music. A prolific pedagogue, he joined in 2007 the faculty of the Juilliard School in New York, having previously held professorships at Western Michigan University, as well as in Helsinki, Stockholm, and Hanover.

Also included are the famous Ten Pieces for Piano from Romeo and Juliet, Visions fugitives, and Sarcasms, as well as further cycles and popular piano solo pieces

All recordings were previously released to highest acclaim.

Formidably played and well recorded, it will alert even the most seasoned listener to the conflicting elements of Prokofiev's always "difficult", prickly and volatile nature...[Raekallio] plays with a shot-from-guns virtuosity that carries all before it...[it] makes for compulsive listening, achieving a keen sense of "works of art that are full of glittering razor-blades" (Picasso)