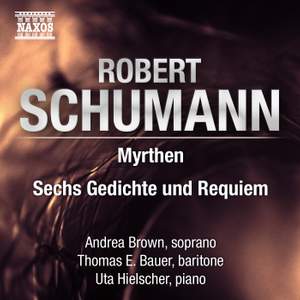 Bauer has a meaty, sizable voice and brings real engagement to the text. — BBC Music Magazine, September 2011, 3 out of 5 stars

This sixth disc in the Naxos series of the complete Schumann Lieder features the 26 songs of Myrthen (Myrtles), which date from February of that year.

Robert Schumann’s literary interests influenced his choice of the poems he used for his songs, many of which were composed in a burst of activity during the ‘Year of Song’ 1840. Dedicated to his beloved Clara (myrtles were used for bridal wreaths), this album of exquisite songs explores themes of devotion, longing, loneliness, matrimony and maternity. His Six Poems and Requiem of August 1850 set mournful texts by Lenau, concluding with an anonymous Medieval poem ‘Héloïse's lament for Abelard’.

Bauer has a meaty, sizable voice and brings real engagement to the text.