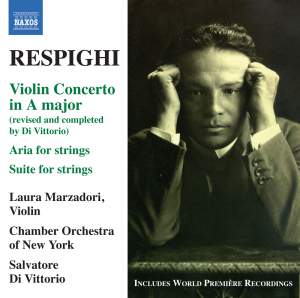 Most of this music is backward-looking pastiche...The exception is the unfinished Violin Concerto, a fascinating discovery brought to life by Di Vittorio who has done a magnificent job of realising... — Classic FM Magazine, August 2011, More…

Although Respighi’s reputation rests on the justly celebrated trilogy of Roman tone poems, he also wrote a number of distinguished works in other forms. His unfinished First Violin Concerto in A major (1903) was recently revised and completed by composer/conductor Salvatore Di Vittorio, who directed its première in 2010.

This is the world premiere recording of the Violin Concerto, performed by the young Italian violinist Laura Marzadori. Harking back to the masterful writing of Vivaldi and Mendelssohn, the Concerto also foreshadows the orchestral technicolour of the great Italian composer’s ‘Roman Trilogy’.

Most of this music is backward-looking pastiche...The exception is the unfinished Violin Concerto, a fascinating discovery brought to life by Di Vittorio who has done a magnificent job of realising and expanding upon the existing material. Laura Marzadori proves an eloquent and impassioned soloist in the Violin Concerto

The best known work here is Rossiniana, dating from 1925 and an example of Respighi's postmodern flamboyance at its best. The disc's raison d'être, however, is Di Vittorio's performing version of the Violin Concerto in A...in essence, it's a big, late Romantic concerto, reminiscent of Brahms. Laura Marzadori does some nice things with it – the ornate slow movement is particularly refined

the concerto inhabits a similar world of sound artfully allied to the dynamism familiar from violin concertos by Mendelssohn, Bruch and Brahms, together with the clarity of orchestration that Respighi inherited from Rimsky-Korsakov. Left unfinished in 1903, the concerto has been completed by Salvatore Di Vittorio, and its performance here is spirited.

Not a lost masterpiece, but tempting for admirers of the composer – at a handsome bargain price.