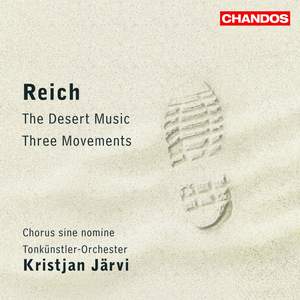 Järvi sets a new benchmark. These powerful readings infuse Reich's New York vigour with loose-limbed elegance, yet give a menacing edge to the pulsating rhythms and dynamics. Järvi does full... — BBC Music Magazine, September 2011, 5 out of 5 stars More…

The American composer Steve Reich pioneered the style of minimalism in music. He has been hugely influential on contemporary composers such as John Adams, but also on the progressive rock movement of the 80s with bands such as King Crimson and rock musicians such as Brian Eno. The Guardian has described him as one of ‘a handful of living composers who can legitimately claim to have altered the direction of musical history’.

The Desert Music is perhaps Reich’s most ambitious orchestral score to date – a setting of texts by the American poet William Carlos Williams (1886 – 1963) for chorus and large orchestra. It is a highly symphonic piece which is inspired by Reich’s own travels in California’s Mojave Desert, the White Sands – and perhaps in particular the Alamagordo in New Mexico, which carries sinister associations with secret weapons of mass destruction and suggests a geographical link with the poet’s somber warning to mankind in the work’s central movement.

Another opportunity to write for large orchestra came when the St Louis Symphony Orchestra commissioned Reich to write his Three Movements. This work was premiered in St Louis under Leonard Slatkin in April 1986. As in The Desert Music, the sizeable string section is divided, here into two subsections which are placed to the left and right of the conductor to create the alternating antiphonal effect that is so characteristic of Reich’s style.

Hearing these performances, Steve Reich described them as ‘Incisive, focused, and intense’ and continued ‘this recording of Three Movements is the best I have ever heard. The Desert Music is full, rich, yet full of detail. Kristjan Järvi, the Tonkünstler-Orchester, and Sine Nomine perform with a relaxed rhythmic precision that perfectly fits the music. Bravo and thanks to all.’

This is the third SACD recording on Chandos by the Vienna-based Tonkünstler-Orchester, Niederösterreich under Kristjan Jarvi, its Chief Conductor and Music Director from 2004 – 2009. They are joined by Chorus Sine Nomine, one of Austria’s leading vocal ensembles and winner of numerous awards and prizes.

Järvi sets a new benchmark. These powerful readings infuse Reich's New York vigour with loose-limbed elegance, yet give a menacing edge to the pulsating rhythms and dynamics. Järvi does full justice to the more lyrical antiphonal passages and, helped by the superbly detailed sound, maintains a clear focus on each of the piece's structural details as well as keeping a firm grip on their sweeping trajectories.

Balancing the urge to imbue The Desert Music with too much flamboyance and the need to make it as mechanical as possible is a huge ask of an orchestra...so it is to their eternal credit that the players and Järvi manage to keep a handle on proceedings. As thrilling as Reich’s works usually are, they rely strongly on perfect performance – and this honestly isn’t far off.

even Reich agnostics will find these two “symphonic” pieces hard to resist. Written more than a quarter of a century ago, they find him in his most easily communicative vein...Swinging performances from the Tonkünstler Orchestra and Chorus sine nomine under Järvi.

As far as the performances go, they're clear, acutely balanced and unyielding but never aggressive in their rhythms...and they are recorded in a way that offers plenty of detail without a sense that we're in a synthetic environment. They are therefore strongly recommended to newcomers.

The musical world of both pieces is one that the conductor Kristjan Järvi seems to understand instinctively; there's a warmth and richness to the textures and a purposeful thrust and precision to the rhythms in his performances that are completely faithful to the essence of Reich's music.