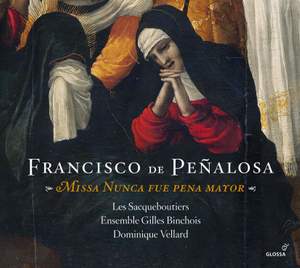 Recorded in the Cathedral of Maguelone, France, in October 2010

Wind ensembles of this sort were common in Spanish collegiate churches and the combination makes for quite a taut yet nicely varied sound that supports the longer spans of the Mass effectively...these... — Gramophone Magazine, September 2011 More…

Dominique Vellard’s interest in music from the Iberian Renaissance has been constantly reflected in the performances and recordings of his Ensemble Gilles Binchois across the last three decades and all his experience and insight in this area is now being brought to bear on a new recording (a sparkling addition to his work for Glossa) of the Missa Nunca fue pena mayor by Francisco de Peñalosa, a composer who Vellard regards as being “a composer of extreme importance and a ‘classic’ of the Spanish Renaissance long before Cristóbal de Morales.” In addition to the Mass – regarded as Peñalosa’s masterpiece – Vellard adds a selection of motets and hymns, which includes not just Sacris solemniis but also the Memorare Piissima (over which scholars have long debated its precise attribution).

Dominique Vellard, together with four other singers specially chosen for this repertoire, is joined in these performances from Maguelone Cathedral by the rich instrumental brass talents of the Toulouse-based Les Sacqueboutiers, led by Jean-Pierre Canihac and Daniel Lassalle. This new Glossa release, emphasising the label’s happy and skilled flair with early music from Spain, adds significantly to the meagre selection of recordings devoted to Peñalosa, is graced inside by a thoughtful essay by the foremost scholar of early Iberian music, Tess Knighton, and on the outside by the striking usage of a painting by another of Peñalosa’s contemporaries, Pedro Machuca.

Wind ensembles of this sort were common in Spanish collegiate churches and the combination makes for quite a taut yet nicely varied sound that supports the longer spans of the Mass effectively...these attractive performances allow the music to speak for itself.

All possible combinations of voices and instruments appear in this programme...The result is an ever-changing tapestry of sound which always clarifies rather than obscures the music and, in purely aural terms, is simply ravishing. Vellard directs the Mass and motets with easy grace and a clarity of purpose that make seeming light work of all the compositional complexities.