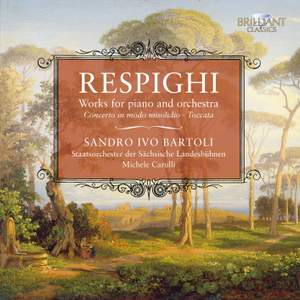 Respighi: Works for Piano and Orchestra

Respighi: Toccata for Piano and Orchestra

Concerto in modo misolidio and Toccata are Respighi’s last and best works for piano and orchestra. They are recorded here on a single CD for the first time. This award-winning team of Soloist and Conductor have collaborated before (Malipiero piano concertos) and won a Diapason D’Or/Dècouverte in January 2008.

Since the early Nineties, with Cherkassky’s support and encouragement, Sandro Ivo Bartoli revisited the Italian literature from the early Twentieth century, establishing a trend and rapidly becoming its leading interpreter. This exciting new issue brings together one of the most popular of late-Romantic composers with a fine talent on the Italian scene who is quickly winning a reputation abroad. Sandro Ivo Bartoli has shown himself a fine champion of early 20th-century piano music, especially from his home country.

The combination of piano and orchestra might seem ideally suited to the style(s) of Ottorino Respighi, offering as it does the generic possibilities for weighty declamation, broad melodies and attention-drawing virtuosity: all these qualities can be heard in abundance in his best works in for this medium, the Concerto in modo misolidio and the Toccata. Presented here for the first time as a coupling, both of Respighi’s great works for piano and orchestra take inspiration from early music, as may be judged from their archaic titles. Pre-Baroque modes and forms, in which Respighi became something of an expert in the dawn of early-music scholarship, pepper these score with an exotic, yet historically conscientious flavour. The Concerto is grand in manner and generous in scale; the single-movement Toccata is much more driven, and indeed hectic at times. The combination of these two works on a single CD makes for a sensational pairing, full of Romantic melodies and high-quality pianistic thrills.