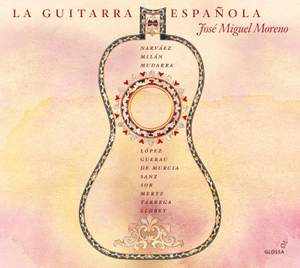 There is no question of José Miguel Moreno being anything other than the leading Spanish specialist in historical plucked string instruments. As a concert performer, researcher, builder and collector of instruments and co-founder of the Glossa label, Moreno has, over the last 30 years, been the guiding beacon for a number of succeeding generations of guitarists and lutenists the world over. Glossa was the label for which he recorded two of his now legendary programmes, La Guitarra Española (1536-1836) and La Guitarra Española (1818-1918). These had previously been deleted but Glossa are now bringing them back as a double set.

Moreno plays a range of instruments made either by Lourdes Uncilla or by himself in order to infuse with a new vitality the fundamental repertories in the history of the guitar as bequeathed by the vihuelists Narváez, Milán and Mudarra, then later composed by figures such as Francisco Guerau, Santiago de Murcia and Gaspar Sanz, and subsequently through the romantic scores of Fernando Sor and Johann Kaspar Mertz. Tárrega and Llobet, the great masters of post-Romanticism, close this survey striding with infinite musicality across the most representative compositions of four centuries of the Spanish guitar. This special edition marks, as well, the departure point of a new process of collaboration between José Miguel Moreno and the label which he helped to create, with brand new recordings being planned, which will appear from the autumn of this year onwards.