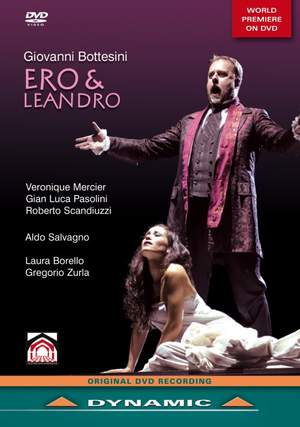 Bottesini is remembered mainly as a double-bass virtuoso and conductor, but he was also a composer; apart from several works for the double-bass he also wrote seven operas. The best known, Ero e Leandro, was recorded at the Teatro San Domenico, Crema, in 2009 and Dynamic is delighted to present its world première recording on DVD.

The opera has only three characters: the priestess of Venus, Ero, Leandro of Abìdo and the perfidious Ariofarne, high magistrate of Thrace and King of the Sacrifices. The Greek myth of two beautiful humans whose love causes the envy of the gods has been changed by librettist Arrigo Boito, who creates the character of a mean king who opposes their relationship.

The score, stylistically comparable to the late Verdi, certainly reveals unusual attention to orchestration and uses a richly chromatic language, not without influences of the Wagnerian style that was then catching on in Italy too. It stands as a worthy addition to Italian opera repertoire of the second half of the nineteenth century.

Aldo Salvagno gives a stirring account from the pit...The soloists make telling contributions. Véronique Mercier is a lyric soprano, capable of producing sweet notes and phrasing neatly...[Pasolini] possesses a strong voice and a steely, though not unpleasant top...The driving force of Scandiuzzi's sonorous bass makes a malevolent, unbending figure of Ariofarne...It is of much interest, and I am very pleased to have come across it.