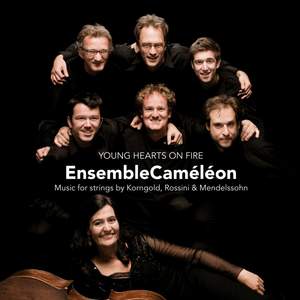 The three pieces on this new CD were written by composers in their youth. Whilst Rossini, Mendelssohn and Korngold became leading composers in later life, they were considered in their time to be child prodigies. The music, which includes Mendelssohn’s Sinfonia for Strings opus 10, Rossini’s Sonata a Quattro No. 6, and Korngold’s String Sextet, is performed by the highly-talented young Dutch group EnsembleCaméléon.

EnsembleCaméléon was founded in 2002 by a group of string players from the prominent Dutch symphony orchestras. Their concerts have been critically acclaimed by press and public for the high individual level of the musicianship, ensemble performance, musical conviction, and boundless enthusiasm. In 2006 EnsembleCaméléon toured the major cities in South America. The following year the group played at the Schleswig-Holstein Festival, and in 2008 it performed in Ireland. In 2007 EnsembleCaméléon made its debut in the concert series of the Small Hall of the Concertgebouw, where it now returns on a regular basis.

The Sonata No. 6 is the last of a group of works for strings written by Gioachino Rossini in 1804 when he was only twelve years old. Felix Mendelssohn was about fourteen when he composed his twelve string symphonies. These pieces which were written between 1821 an 1823 were not intended for public performance and were not published until long after his death. Erich Korngold was 17 or 18 when he composed the String Sextet in D Major in 1914.