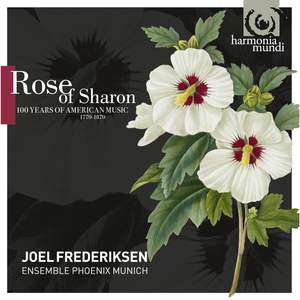 Frederiksen and his musicians are as imaginative as they are respectful and zealous...and this CD is a viable recital, not just a catalogue...Is 'Rose of Sharon' of potential interest to non-Americans?... — International Record Review More…

anon.: The Death of General Wolfe

Billings: God is the King

Billings: I Am the Rose of Sharon

anon.: Tis the Gift to be Simple

anon.: The Army of the Free

Wood, Al: Dance Me a Jig

“This program is like an American quilt – the individual parts are unique and very different from one another, but it comes together to form one rich tapestry. I would like to give our audience a picture of some of the rich traditions that developed out of our European heritage, but flourished and grew in their own unique way in the New World.” Joel Frederiksen

The activities of Joel Frederiksen, artistic director of Ensemble Phoenix Munich, are many-faceted. As a bass singer he has performed with Jordi Savall, Paul O’Dette, and Stephen Stubbs and with the ensembles Musica fiata, Freiburger Barockorchester, Josquin Capella, Ensemble Gilles Binchois, Huelgas Ensemble, The Waverly Consort and the Boston Camerata. As a singer who plays the lute, Joel Frederiksen is a leading interpreter of music by the English lutenist songwriters and of early Italian Baroque music. His wide-ranging basso profundo voice and his expressive performances have earned him worldwide acclaim. The Elfin Knight, his first CD for harmonia mundi with his Ensemble Phoenix Munich, was released in August 2007.

Frederiksen and his musicians are as imaginative as they are respectful and zealous...and this CD is a viable recital, not just a catalogue...Is 'Rose of Sharon' of potential interest to non-Americans? Definitely. As already mentioned, it has been assembled with the average listener in mind, not academics. Furthermore, the performances are consistently gracious and winning.

Frederiksen has compiled a fascinating compendium of “America’s early music”. We hear works that sound like Victorian parlour songs; tunes from the old country’s folk styles; pieces that recall the West Gallery traditions of English country churches. Yet a more confident American identity emerges, trading on a certain directness of manner.