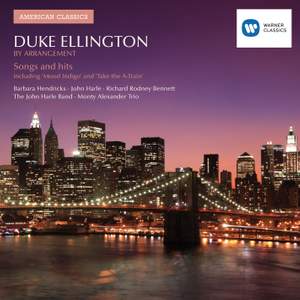 The Duke might have bridled at John Harle's arrangement of Ellington standards, but the saxophonist's virtuosity would have brought him to his feet. — BBC Music Magazine, July 2011, 3 out of 5 stars

Ellington: I let a song go out of my heart

Ellington: Don’t Get Around Much Anymore

Ellington: Prelude to a Kiss

Ellington: Take the 'A' Train

Although Duke Ellington was foremost in the world of jazz, he should be regarded as one of the great composers of the 20th century, regardless of genre. One of John Harle's childhood influences was hearing Johnny Hodge's saxophone in the Duke Ellington Band in London in the early 1970s, and Harle's performances here are a homage to Ellington. The Jamaican jazz pianist Monty Alexander and the American operatic soprano Barbara Hendricks recorded their Ellington tribute at the Montreux Jazz Festival in 1994.

The Duke might have bridled at John Harle's arrangement of Ellington standards, but the saxophonist's virtuosity would have brought him to his feet.