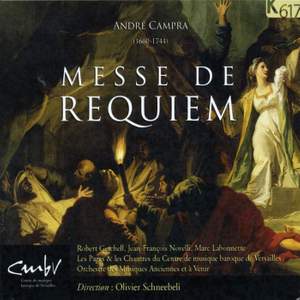 André Campra (1660-1744) was one of the leading figures in the revival of French musical style, nourished by Italian influences, which is characteristic of the Regency and the reign of Louis XV. If this 'meeting of tastes' is more familiar to us in the fields of opera and chamber music, it also permeated the sacred repertoire. The Requiem embodies, more than any other, this combination of a deep spirituality with exuberance, sumptuosness and invention. Campra's masterpiece, accompanied by one of his grands motets (In convertendo), led the way for other typically 'Gallican' requiems, whose serene light was to shine anew in settings by Gabriel Fauré and Maurice Duruflé.