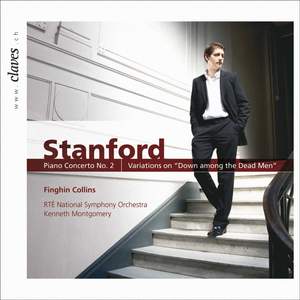 Both performances excel. Tackling each torrential piano part, Collins has flair, energy, and lyrical poise to spare. The orchestra's contributions are as fresh and crisp as a newly minted banknote.... — BBC Music Magazine, June 2011, More…

Stanford: Concert Variations in C Minor, Op. 71 upon an English theme "Down among the Dead Men": Thema & Variations

Do you know Charles Villiers Stanford? If not, here is a wonderful opportunity to fill this gap: Irish pianist Finghin Collins (author of several Claves albums, among which volumes 1 and 3 of the Schumann collection) and the RTÉ National Symphony Orchestra co-sign with the Swiss label a magnificent recording completely dedicated to this …. Irish composer! Son of a protestant lawyer, Stanford went to Queen's College in Cambridge and Trinity College, Dublin, then left for Leipzig to study with Reinecke and Kiel. Most of his life and work were associated with Cambridge, where he was a prominent actor of the University Music Society, and with London's Royal College of Music, where he taught composition right from the opening of the establishment in 1883. He is to be thanked for the first English auditions of numerous Romantic masterpieces – such as Brahms' First Symphony in 1877 – and for highly original symphonic arrangements of Hymns for the Anglican liturgy. Among his own productions, « The Revenge » - a choral ballad written for the Leeds Festival – remained an absolute favourite with British choirs for many years. Featured on Finghin Collins's CD, his 2nd Piano Concerto also dates from the 1910 Leeds Festival, where Sergei Rachmaninov interpreted his 2nd Concerto himself. The work is dedicated to Ukranian pianist Moritz Rosenthal. The Concert Variations upon an English Theme "Down Among the Dead Men", on the other hand, date from 1898 and were written for Leonard Borwick, an English pianist and former pupil of Clara Schumann.

Both performances excel. Tackling each torrential piano part, Collins has flair, energy, and lyrical poise to spare. The orchestra's contributions are as fresh and crisp as a newly minted banknote. And the recording finds a wonderful balance between vivid detail and comfortable space.

Collins is suitably limpid in the slow movement's rhapsodical moments, and in his hands the finale is exhilarating, not merely rumbustious. He's equally successful in expressing the different moods of the Variations. Collins and Montgomery are excellent advocates for music which should appeal to any lover of Rachmaninov and Brahms.

His is a vigorous and assertive reading [of the Piano Concerto], matched by the robust partnership of Kenneth Montgomery and his Irish players...This is no rehearse-record performance but one that is breezily sure of itself...Collins's "Down among the dead men" is, again, a superbly muscular, confident account...Warmly recommended.