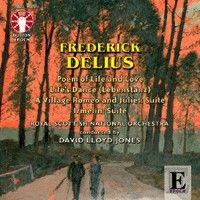 Delius: Poem of Life and Love

With an old Delius hand in David Lloyd-Jones at the helm, the Royal Scottish National Orchestra's performance are assured and thoroughly idiomatic. — BBC Music Magazine, September 2011, 4 out of 5 stars More…

Delius: Poem Of Life And Love

Poem Of Life And Love

The four Delius works contained on this new Dutton Epoch release are seldom heard, yet each is of outstanding musical interest and contains passages of characteristic beauty. Life’s Dance teems with an almost Straussian richness of thematic material, and calls for a degree of orchestral virtuosity that is rarely found in Delius. The more extended Poem of Life and Love (receiving its premiere recording) had to be slightly reconstructed and was first published only in 1999; it is the last in the composer’s great series of works for orchestra alone. At the end of his life, Delius extracted some of its most haunting sections to form A Song of Summer. The Suites derived from two of Delius’s six operas serve to rescue wonderful music, which, because of the rarity of productions of the works themselves, is only occasionally heard. That for his first opera, Irmelin, was arranged by Sir Thomas Beecham and contains the kind of melodic and orchestral richness that we associate with the ever-popular Florida Suite. David Matthews has selected some of the more extended orchestral passages from Delius’s operatic masterpiece, A Village Romeo and Juliet, to form a representative suite from this haunting and heart-breaking score. For those who do not know the opera, this generous selection will come as something of a revelation.

With an old Delius hand in David Lloyd-Jones at the helm, the Royal Scottish National Orchestra's performance are assured and thoroughly idiomatic.

the RSNO under David Lloyd-Jones's consistently sympathetic lead seem to enjoy making the acquaintance of all this material. The sound is vivid, if a tad raw in any bigger tuttis. No need, however, to withhold a solid recommendation for what is undoubtedly an appealing and enterprising anthology.