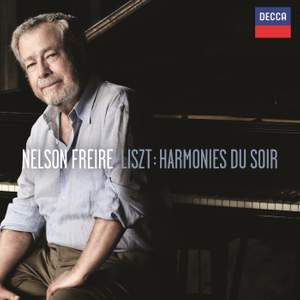 This is immensely distinguished Liszt-playing...Freire seems utterly at one with the music, not only in terms of its innate poetry but also its astonishing diversity of texture and touch...Freire... — BBC Music Magazine, July 2011, 5 out of 5 stars More…

In celebration of the Liszt year 2011, multi-award winning pianist Nelson Freire has personally selected the repertoire for his latest recording – his contribution to the anniversary of the pianist-composer’s birth in 1811.

Brazilian pianist Nelson Freire who The New York Times heralded as “an extra-ordinary pianist”, continues to garner both awards and critical acclaim for his recordings and concert appearances.

Nelson Freire’s most recent album of Chopin Nocturnes (4782182) received a Diapason d’or of the Year award in France and a Grammy nomination.

This is immensely distinguished Liszt-playing...Freire seems utterly at one with the music, not only in terms of its innate poetry but also its astonishing diversity of texture and touch...Freire produces a really beautiful piano tone, too, conjuring an astonishing range of colours...Altogether an immaculate disc, enhanced by an excellently recorded balance.

’ll be very surprised indeed if Freire’s new recital isn’t counted as one of the best new recordings for Franz Liszt’s 200th birthday year...Freire has the gift of seeming to slip inside the skin of every piece here, never distracted by surface glitter or showmanship as he seeks the musical truth

Freire is a master of the Romantic repertoire – partly by dint of experience and maturity, which lend his pianism a grace and temperament that is always finely judged, not least in the opulent rhetoric of the Ballade No 2. But he also demonstrates a range of tone-colour and warmth of feeling that are essential to Liszt

Freire's selection is a judiciously varied programme of works for which he has a particular fondness - and it shows...Again and again one marvels at the spontaneity of Freire's playing, his ability to think in long paragraphs and bring an almost improvisatory air to proceedings

[Freire] wears his undeniable virtuosity lightly in this spellbinding programme of choice Liszt...It is, above all, the reflective, dreamy, romantic side of Liszt’s personality that Freire celebrates here...his selections from the Années de pèlerinages...confirm his preference for the poetic Liszt of limpid, transparent sonorities, rather than the flamboyant glitz merchant

it provides a wonderful corrective to those who think of this composer's piano music as all flamboyant gestures and rhetoric. The overwhelming impact of this disc stems from the sheer beauty and elegance of Freire's playing, his crystalline tone and infinitely subtle range of touch and colour, which are combined with all the technique needed to cope with whatever challenges these pieces present him.