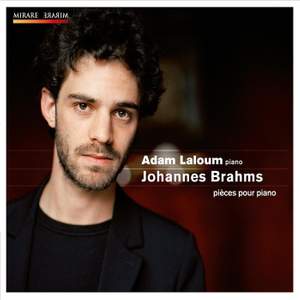 From the age of 20 onwards, Brahms wrote unceasingly for the piano. His solo pieces for the instrument, ranging from the poetic evocations of the variations Op.21 to the nostalgic yearning of Op.117, may be seen as personal journal.

Adam Laloum was born in Toulouse in 1987. He began studying the piano at the age of ten and has studied with Michel Béroff, Paul Badura-Skoda, Pascal Devoyon and Jean-Claude Pennetier. Since October 2009 Adam has been a student at Hamburg’s Hochschule für Musik under Evgeny Koroliov who won the Clara Haskil Prize in 1977.

In September 2009 Adam won the first prize the audience award at the Clara Haskil International Piano Competition. One to watch…