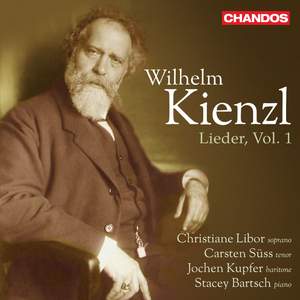 on this evidence, [Kienzl's] lieder - melodically attractive, resourcefully composed, and in an idiom that owes something to Schubert, Schumann and Brahms, but far less to his idol Wagner - are... — Gramophone Magazine, July 2011 More…

This is Volume 1 in a planned series of two, devoted to the rarely recorded but striking and imaginative Lieder by Wilhelm Kienzl, a composer of the romantic post-Wagner era. The works are performed by artists steeped in the Lieder tradition: Christiane Libor, Carsten Süss, Jochen Kupfer, and Stacey Bartsch.

Kienzl was an active music director in Austria, The Netherlands, and Germany, and a noted author. His autobiographical volume, Aus Kunst und Leben (1904), is valuable for his recollections of Wagner, Wolf, Smetana, Johann Strauss, Brahms, Verdi, and Loewe, and his collection of music criticism, Im Konzert (1908), shows him to have been an independent-minded musician who was open to the new music being created by his contemporaries.

But above all, Kienzl was a composer for the voice, and chiefly known for his operas, the extremely popular Der Evangelimann in particular. He also wrote piano and chamber music, including three string quartets, and well over 200 songs (Lieder), a genre to which he added right up until his last years. The selection of Lieder on this recording span the earlier part of Kienzl’s career and shows him to have had impeccable literary taste. The settings include classic poems by the likes of Goethe, Eichendorff, Heine, and Lenau to contemporaries such as Robert Hamerling, and to folk-like texts by Elisabeth, the Queen of Romania, and others.

The Heine poem that Kienzl entitles ‘Traumesahnung’ also appears in Schubert’s Schwanengesang as ‘Ich stand in dunkeln Träumen’. Kienzl’s setting is very different from Schubert’s, but emotionally very powerful: the rushing, turbulent semi-quavers of the piano part and the vocal part sharply evoke a sense of loss and desolation.

In contrast, Kienzl’s ‘Lenz!’, the first of a set of 4 Frühlingslieder to words by Sophie von Khuenberg, is a rippling stream of bubbling arpeggios that propels the joyous passions of this high-spirited spring song. ‘Gesunden’ is an altogether more ambitious song, built of several elements, including the triplet accompaniment, the left-hand piano motif at the beginning, and the singer’s soaring melody. This is arguably one of Kienzl’s finest songs.

on this evidence, [Kienzl's] lieder - melodically attractive, resourcefully composed, and in an idiom that owes something to Schubert, Schumann and Brahms, but far less to his idol Wagner - are well worth revival...Of the three singers, Christiane Libor gives the most consistent pleasure, fining down her ample soprano in a touching "Die verschwiegene Nachtigall"...this disc is recommended to any inquisitive Lieder lover.

I hope that this disc reaps the success it deserves and wil be far from the last journey for Kienzl's Lieder. Why, how, have they fallen into neglect? Here, Suss and Kupfer are particularly persuasive advocates, both of them gracing their songs with pleasing tone and varied dynamics. Libor does a good job, though with less by way of contrast in her singing.