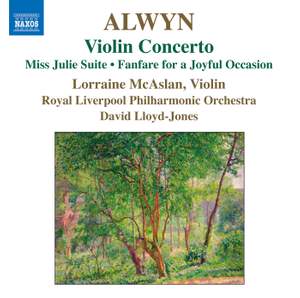 Lorraince McAslan makes a convincing case for the work: fearsome weight of tone is not her style, but she has bravura and accuracy to spare, and her musicianship's brand of thoughtful loveliness... — BBC Music Magazine, July 2011, More…

Naxos’s many highly-praised recordings of William Alwyn’s music have done much to revive excitement among today’s listeners for this British composer who is best known for his 200 or so film scores.

Alwyn’s bravura Violin Concerto, the second and most substantial of his six concertos, is romantic and rhapsodic in nature. The Miss Julie Suite takes episodes from his last completed opera based on Strindberg’s tragic play, while the Fanfare for a Joyful Occasion pays tribute to the late percussionist James Blades.

Juilliard School-trained violinist Lorraine McAslan has been praised by The Strad as “one of the most distinguished British violinists of her generation”.

Lorraince McAslan makes a convincing case for the work: fearsome weight of tone is not her style, but she has bravura and accuracy to spare, and her musicianship's brand of thoughtful loveliness suits the slow movement beautifully.

McAslan plays [the Concerto] with such heart-rending sincerity, technical poise and beguiling tonal purity. The RLPO under David Lloyd-Jones's inspired direction, support her to the hilt and then come into their own with a thrilling traversal of the Miss Julie Suite that captures its coruscating changes of mood with tactile precision.

Lloyd-Jones and McAslan give admirable shape to the long, rhapsodic first movement...[the] technically demanding finale is performed with agile warmth by McAslan whose attractive tone and expressive style seem entirely in tune with this distinctive musical language. It is good to hear the suite of pieces from Alwyn's last completed opera, Miss Julie...A recording that fuels one's desire to hear the entire opera properly and professionally staged.

the dramatic overture The Moor of Venice and the Seven Irish Tunes arranged into a suite for small orchestra – are perfectly judged light music. The equally slight Serenade from 1932, though, is a bit more than that...they come together in a distinctly pithy and pungent sequence.

It's couched in an unashamedly late-Romantic idiom, and if it has a model at all, it is Elgar's violin concerto, with which it shares a mood of autumnal wistfulness in its long opening movement...Lloyd-Jones shapes it with great affection and the soloist Lorraine McAslan seems utterly authoritative; their performance suggests the concerto does deserve to be heard in a concert hall soon.

this recording calls attention to the music’s beguilingly romantic heart and to Alwyn’s ability to make the violin sing. Beautifully played by Lorraine McAslan, the concerto also benefits from the support of the RLPO under David Lloyd-Jones.

Although there have been previous performances, the Alwyn Violin Concerto is a piece which has yet to win favour with many lovers of British music. However, this committed reading will be another step along the road to the work’s acceptance.