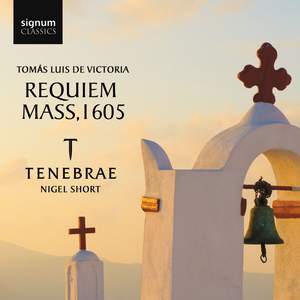 Short finds a musical dramaturgy to match that of the text. The Requiem is written for six voices, but this choir of 20 never seems lumbering or unbalanced. They are perfectly tuned (listen to... — BBC Music Magazine, June 2011, 5 out of 5 stars More…

Tomás Luis de Victoria’s requiem mass for six voices, written in 1603 and published in 1605, is a masterpiece. It is one of a handful of large-scale works which enjoys mainstream appeal in the 21st century. For many, it represents what Renaissance polyphony is, what it sounds and feels like, and how expressive it can be. The disc also features two well-known works by Victoria’s contemporary Alonso Lobo.

Short finds a musical dramaturgy to match that of the text. The Requiem is written for six voices, but this choir of 20 never seems lumbering or unbalanced. They are perfectly tuned (listen to the exquisite poise of the Agnus Dei), and one is rarely aware of intrusive individual singers. The acoustic has a long echo, but the sound is kept nicely in focus. This recording does justice both to the genius of Victoria and to the musicality of Tenebrae.

[the Lobo settings] allow Tenebrae to demonstrate the full range of their fingertip coloristic precision and ease at negotiating tricky chromatic relationships...Tenebrae avoid the emotional hard-sell by stressing lines for dramatic effect, and let the sounds themselves do the work. This is a definitive modern Victoria Requiem, performed by a choir who relish its musical and expressive challenges.

here is music of essential simplicity and spiritual depth. Tenebrae’s performance, directed by Nigel Short, is gently sustained, immaculately balanced and wrapped in a luminous acoustic...If you have ever developed a resistance to Renaissance polyphony, this could be the disc to make you think again.

This new recording by Tenebrae...recalls the wonderful 1987 recording by the Tallis Scholars in its luminous clarity and firm architectonics...Immediately apparent are the modulations of feeling directly registered in the undulating phrases, something that characterizes this performance as a whole.

Tenebrae here exquisitely conveys the the flowing relationships between its six voices...The group presents the work with elegant subtlety, allowing the full detail of tonal colouration to shine through unencumbered. The abnegation of wordly misery in lines such as "My soul is weary of my life" is echoed in the less well-known but equally absorbing "Versa est in luctum"

Tenebrae applies its customary sensibility and expressive power to one of the great cornerstones of the choral repertoire. Beautifully recorded with just the right amount of resonance...Victoria called on all his imaginative resources in this Requiem, and Tenebrae interprets them magnificently.