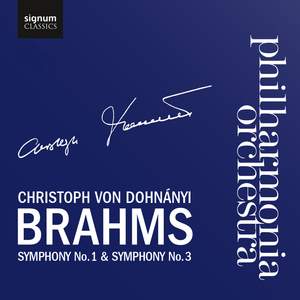 Christoph von Dohnanyi is a conductor who seems to work in black and white rather than in colour. True to form, these live performances are about subtle shading and unexaggerated, probing thoughtfulness,... — Classic FM Magazine, July 2011, 3 out of 5 stars More…

Signum’s first disc of 2011 with the Philharmonia returns to the works of Brahms with his first and third symphonies, conducted by Christoph von Dohnanyi.

The dual hindrance of Brahms’s self-criticism and a public expectation of a work to follow or surpass the symphonies of Beethoven, resulted in an unusually long formative period for the first symphony – a gap of over 20 years from 1854 initial sketches to the works premiere in 1876. The result was worth the wait however, dubbed ‘Beethoven’s Tenth’ by the conductor Hans von Bülow following a performance.

By contrast, the third is the shortest of all four of his symphonies and was completed over the summer of 1883. A more lighthearted work, some claim that it is inspired and influenced by Brahms’ close relationship with the singer Hermine Spies at that period in his life.

This recording follows the 2008 release of Brahms second and fourth symphonies with the Philharmonia and Christoph von Dohnanyi.

Christoph von Dohnanyi is a conductor who seems to work in black and white rather than in colour. True to form, these live performances are about subtle shading and unexaggerated, probing thoughtfulness, bringing out the Classical rather than the Romantic side of Brahms.

[Dohnanyi is] a classicist who appreciates Brahms's romantic soul...[his] account of the First Symphony again opens weightily, the bass pedal a real joist-shaker...But that's very far from the whole story: the slow movement is very lyrical with some effective dovetailing and plenty of light and shade, and the finale generates an impressive sense of joyous release

This specially priced set completes the live Brahms symphony cycle by the veteran conductor Christoph von Dohnányi. The Philharmonia is in excellent form for him, providing warm, solid virtuosity. Dohnányi gives us the classic central European view of Brahms, full-toned and never rushed, yet with inexorable forward movement.