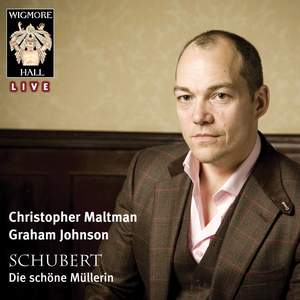 This is an extraordinarily subtle performance of Schubert's first great cycle. Wonderfully recorded, with an ideal balance between soloist and pianist, it leaves you wondering, at times, who... — BBC Music Magazine, June 2011, More…

Recorded over a series of live dates, Maltman has collaborated with one of the world’s foremost authorities on lieder repertoire, piano-accompanist Graham Johnson, in a triumphant partnership. The first release, Die Schöne Müllerin, was Schubert’s first complete song cycle, composed at the age of just 26. The work requires the singer to draw upon a range of moods, from raw emotional turmoil and unpredictability, to introspection and ultimately resignation. Maltman states that the work requires a “certain vulnerability” in its portrayal of the lovelorn young miller, and to achieve this, he and Johnson chose to transpose several of the songs back up to the outer reaches of the baritone range, closer to that of the tenor. The duo’s decision to take the voice out of its comfort zone and embrace the tension this produces undeniably adds to the colour and characterisation which Maltman brings to the work: “These musical masterpieces present an endless pursuit and a constant re-examination.” The next release in the cycle will be Winterreise in September 2011, followed by Schwanengesang in 2012, the live performance of which was critically-applauded in the Guardian: “Maltman's pianist was Graham Johnson, whose focused, detailed playing reminded us just how far Schwanengesang redefined the role of the accompanist"

Maltman’s decision to undertake these substantial recordings as a live project was a considered choice: “the live recording experience is where the real beauty lies; the little points, the little imperfections, the emotional stress, give the performance an organic feel, a rawness. It dials everything back to the most important element – the live performance.”

This is an extraordinarily subtle performance of Schubert's first great cycle. Wonderfully recorded, with an ideal balance between soloist and pianist, it leaves you wondering, at times, who is accompanying whom...Maltman, with his gloriously warm light baritone, is born along on the stream of the piano's uncertainties, and the total effect is disturbing and unique...indispensable for anyone wanting to probe beneath its adorable surface.

Maltman brings a fierce intelligence and a wide range of vocal colour to his performance, and he manages to balance a sense of overarching emotional control from beginning to end with in-the-moment spontaneity...Graham Johnson's accompanying - which now supports, now ironizes the ostensible emotion of the song - adds depth too.

Maltman's journeyman miller is volatile, susceptible, prone to violent swings between elation and self-communing inwardness, but not one who senses his tragic fate virtually from the outset. With its fine bright resonance, his virile baritone initially exudes health and an eagerness to seize life...Maltman's ardent, impulsive, intensely 'lived' performance, partnered and inspired by the ever-illuminating Johnson, should be heard by anyone who loves the cycle.

After only moments in the opening song, 'Das Wandern', one becomes aware that Maltman's singing will not be vocally monochromic...This is a extremely introspective reading, controlled, collected and sensitive...Johnson brings his own eloquent contributions.

This performance...is uncommonly convincing in its combination of vividness and deep introspection...A strong point is Johnson’s piano-playing...but this is very much a partnership. Maltman is a compelling narrator, making you see the pictures and moods described, and imaginatively mixing half-voice and vehement full tone. The Hateful Colour is thrillingly dramatic.