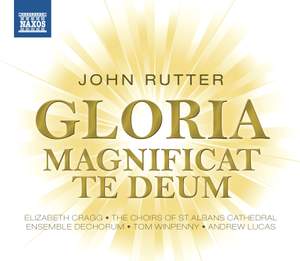 the boys and girls of the combined St Albans choirs disport themselves royally in this recording, pinning the tricksy syncopations of the concluding movement [of the Gloria] deftly, and relishing... — BBC Music Magazine, June 2011, More…

Of a Rose, a lovely Rose

A welcome new addition to the English Choral Music series on Naxos, and a glorious follow-up to the two best-selling Rutter titles in the catalogue - Requiem and Mass of the Children.

The three works heard on this disc span a period of fifteen years from 1974-1990. John Rutter’s Gloria was a milestone in his career as it was the first major commission he had received from overseas, and sowed the seeds of his popularity in America. It remains an evergreen favourite with choirs worldwide for its freshness, drama and sheer beauty.

The joyous setting of the Magnificat was conceived, in the composer’s words, as ‘a bright Latin-flavoured fiesta’ and is performed here in its version for choir, organ and chamber orchestra. This delightful choral album concludes with Rutter’s setting of the Te Deum, one of the church’s most ebullient hymns of praise to the Almighty.

The Choirs of St Albans Cathedral, conducted by Andrew Lucas are on fine form in this their first recording for Naxos. “The sound of the choir is full and colourful throughout and the boys produce a very fine sound indeed matching their well-developed sound with mature musicianship” The Organ

the boys and girls of the combined St Albans choirs disport themselves royally in this recording, pinning the tricksy syncopations of the concluding movement [of the Gloria] deftly, and relishing their high notes at the soaring conclusion...overall this is a notably fresh, uplifting account of what remains one of Rutter's most popular and widely sung creations.

I love the confident swagger and tonal punch of the St Albans trebles, with boys and girls united for this uplifting recording, and the wholehearted commitment of the Hertfordshire cathedral's adult voices...The conductor generally allows Rutter's melodies to breathe and, above all, passionately communicates his interpretations.

this is one of the most attractive Rutter collections yet...The performances here are quite splendid in every respect, with moving solo singing, a dedicated choral contribution, and excellent support from the Ensemble DeChorum and Tom Winpenny (organ) admirably directed by Andrew Lucas.

His festive settings of the Gloria, Magnificat and Te Deum were written over the period 1974-1990. These vivid performances show how thoroughly Rutter can absorb them and make music of exhilarating impact.