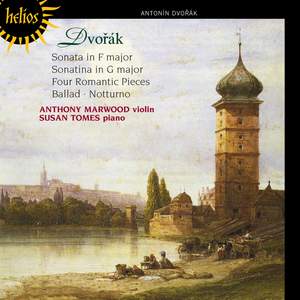 Yet another unimpeachable release from the Hyperion stable — Classic CD More…

Dvorák's music for violin and piano comes from many periods in his career. An early Sonata in A minor of 1873 is lost. Of the works which do survive, several, including the Notturno and Four Romantic Pieces, are skilful arrangements of earlier works (the Notturno is a reworking of the central section of the E minor String Quartet, while the Four Pieces were originally written for viola and piano).

There are two extensive compositions exclusively for violin and piano: the Sonata in F major, interestingly designated by the composer as being for 'piano and violin', and the popular Sonatina in G major, composed during his stay in America. Both are models of perfection in this most relaxed of chamber-music genres.

The Ballad in D minor was composed in the autumn of 1884 specifically for publication in the Christmas edition of the London Magazine of Music and is a work with a tragic and passionate tone akin to that of the Seventh Symphony.

Yet another unimpeachable release from the Hyperion stable

This delectable Hyperion release enshrines music-making of sensitivity and eloquence

The G major Sonatina, written in America, is a particular charmer, but the F major Sonata is also a work to enjoy, as is the ravishing Notturno. I can’t imagine them more beautifully and idiomatically played than in this reissued 1997 recording