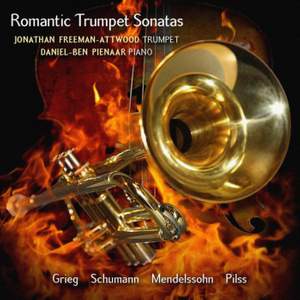 one rather sits up at the opening Praeludium of Grieg's Holberg Suite, flutter-tonguing and all...Throughout, the trumpet-playing of Freeman-Attwood is first class. But what makes this collection... — Gramophone Magazine, June 2011 More…

Renowned for his outstanding technical and musical ability, as well as his unique re-workings of chamber repertoire, this latest album from Jonathan Freeman-Attwood introduces some fresh and unusual arrangements of well-known Romantic music for the under-explored medium of trumpet and piano duo.

The choice of Mendelssohn and Schumann, originally written for cello and violin respectively, allows Freeman-Attwood to demonstrate the melodic lyricism of the instrument as well as the thrilling execution a brass instrument can bring to intricate passage-work.

Grieg’s Holberg Suite has attracted arrangers since its composition; the opening Preludium is a brilliant vehicle for the trumpet and piano, fully showcasing the skills of the duo that have honed their skills over three albums.

These new transcriptions are beyond anything previously imagined for trumpet; they expand the boundaries of the trumpet as a solo instrument and deserve to take their place in the standard repertoire for the instrument.

As a trumpet player, Jonathan Freeman-Attwood has performed and recorded both as a soloist and as a member of various ensembles and has attracted plaudits from the press for his solo recordings.

Jonathan broadcasts regularly for BBC Radio 3 and is Principal of the Royal Academy of Music in London.

South African born Daniel-Ben Pienaar is an award-winning pianist whose live performances and recordings have won him widespread acclaim: “a kaleidoscope of colours and textures” (International Piano).

one rather sits up at the opening Praeludium of Grieg's Holberg Suite, flutter-tonguing and all...Throughout, the trumpet-playing of Freeman-Attwood is first class. But what makes this collection doubly enjoyable is the outstandingly responsive piano contribution from Daniel-Ben Pienaar, who is always excellently balanced with the trumpet.

Freeman-Attwood and Pienaar deliver all four pieces with tremendous panache - above all, they communicate a sense of fun - and the Linn surround-sound recording is a model of clarity and warmth.