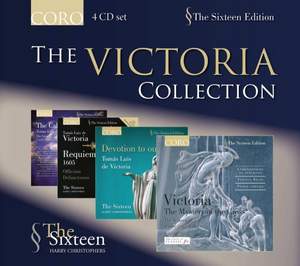 Devotion To Our Lady

The Mystery Of The Cross, Vol. 2

The Call Of The Beloved

Harry Christophers and The Sixteen marks the 400th anniversary of the Spanish composer’s death with a ‘beautifully sung and superbly recorded’ new album centring on the Missa Alma Redemptoris Mater.

2011 marks the 400th anniversary of the death of Tomás Luis de Victoria. This remarkable Spaniard epitomized the emotion and fervour of Renaissance Europe and could be considered the most outstanding composer of his time.

This new boxed set contains four of The Sixteen’s celebrated Victoria recordings for the price of three including his masterpiece, the Requiem of 1605 recorded in surround sound and released in SACD format.

A beautifully packaged set, which compliments perfectly the release of The Sixteen's newest recording by the composer - Hail, Mother of the Redeemer, also features some of the composer's Lamentations for Holy week. What could make a more appropriate Easter gift?