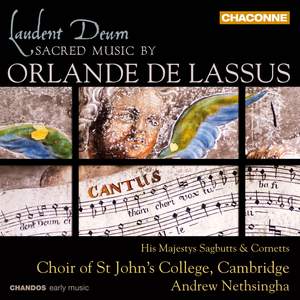 His Majesty's Sagbutts & Cornetts shine in their performance...When solo, the players' clarity of gesture makes their music speak. To add dimension to the lines, the Sagbutts & Cornetts alternately... — BBC Music Magazine, April 2011, 4 out of 5 stars More…

The Choir of St John’s College, Cambridge, an exclusive Chandos artist, here presents its third release on the label. Established in the 1670s, the choir has a long and distinguished tradition of performing religious music and here offers distinguished interpretations of sacred works by Orlande de Lassus. Of its most recent release, Hear My Words: Choral Classics from St John’s (CHSA5085), The Telegraph wrote: ‘The boy treble voices bring lustre and freshness to the sonority and the singing throughout is stirring and polished.’

Lassus was a prolific and versatile composer and the most famous musician of his day. By the age of twenty-one, he had been appointed Director of Music at the church of St John Lateran in Rome, an impressive appointment for one so young. More than 2000 works by Lassus survive: Latin settings of masses, canticles, motets, passions, litanies, and hymns, as well as secular pieces in Italian, French, and German.

Lassus was charismatic and gregarious. He was also bipolar, however, a condition that caused him personal unhappiness, but which also accounted for some of the more original and startling passages in his music. The pieces on this recording represent only a small part of his enormous output: nineteen of the 750-odd surviving motets; two of the one hundred Magnificat settings; and three of his dozen purely instrumental works. It is a small sample, but it shows a composer whose formidable technique, kaleidoscopic ear for texture, and matchless word settings made him the darling of the musical High Renaissance in Western Europe.

The majority of Lassus’s motets were settings of religious texts. Ecce nunc benedicite Dominum is one of two seven-voice pieces chosen for this recording, and its rich texture allows Lassus to explore appealing vocal combinations without breaking into double-choir cliché. Veni in hortum meum places the listener in the gently seductive world of the Songs of Songs – that ‘sensuously exciting and baffling’ book of the Bible, to quote the English novelist and poet A.S. Byatt.

The two Magnificat settings on this recording were composed at least twenty years apart. The Magnificat ‘O che vezzosa aurora’ dates from the mid-1580s. A significant proportion of this work is based directly on a six-voice madrigal by the Modenese composer Orazio Vecchi (1550 – 1605), which was published around the same time. Lassus’s own setting, however, is sunny and optimistic in six-voice sections, and respectively robust and reflective in the three- and four-voice sections.

His Majesty's Sagbutts & Cornetts shine in their performance...When solo, the players' clarity of gesture makes their music speak. To add dimension to the lines, the Sagbutts & Cornetts alternately shadow and pull away from the vocalists whom they double, movements which are deftly caught by the engineers...a provocative glimpse into Lassus's imagination.

while Nethsinga brings scholarly insight to his performances and his musicians bring enviable technical prowess, they also deliver it with complete confidence and self-assurance...Even if Lassus is not a composer whose music would, in the normal course of events, have you making a beeline for this disc rest assured that we have here a fine demonstration of technical and stylistic excellence.

With lively support from His Majestys Sagbutts and Cornetts, the Choir of St John's College, Cambridge takes full advantage of this treasury of vocal colour with exuberant, full-toned precision and impressive musicality.