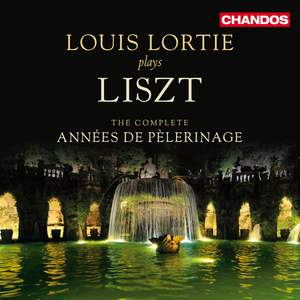 Louis Lortie's credentials for taking on this greatest of musical pilgrimages are self-evident from the start. The opening 'Chapelle de Guillaume Tell', from the Switzerland-inspired first book,... — BBC Music Magazine, May 2011, 4 out of 5 stars More…

The virtuoso pianist and exclusive Chandos artist Louis Lortie here performs all three books, or ‘Years’, of Liszt’s Années de Pèlerinage (Years of Pilgrimage), a work rarely recorded in its entirety. Lortie has made more than thirty recordings for Chandos, covering a repertoire from Mozart to Stravinsky. His recording of Beethoven’s ‘Eroica’ Variations won an Edison Award; his disc of works by Schumann and Brahms was judged one of the best CDs of the year by BBC Music, and his interpretations of Liszt’s complete works for piano and orchestra and of Beethoven’s complete piano sonatas were both selected as Editor’s Choice in Gramophone.

Liszt was an artist by nature. He seemed to feel and be affected by external influences far more deeply than most, and he was a master at translating these feelings into music. The first Year of the Années de Pèlerinage, a reworking of pieces from his earlier Album d’un Voyageur, was inspired by his travels in Switzerland as a young man. In this work, the music does not depict or describe particular scenes or landscapes, rather it attempts to communicate the feeling that Liszt experienced when he saw them, his ‘strongest sensations and most lively impressions’.

‘Chapelle de Guillaume Tell’, for example, depicts a fourteenth-century Swiss hero through a broad and stately theme that quotes a Swiss Alpine horn melody with trumpet calls, echoes, and tremolos. ‘Au lac de Wallenstadt’ depicts the gently rising and retreating waves of the lake, over which Liszt places a theme of beautiful simplicity.

The second Year was inspired by the art and literature that Liszt encountered on his travels in Italy. ‘Sposalizio’ was inspired by Raphael’s painting The Marriage of the Virgin in the Brera in Milan, and ‘Il Penseroso’ by Michelangelo’s statue on the tomb of Lorenzo de’ Medici in the church of San Lorenzo in Florence.

The third and last Year of the Années de Pèlerinage was written much later, when Liszt was in his sixties, and at a time when both the man and the style of his music had undergone a vast change. The pieces show far more simplicity in the treatment of the musical components and often convey a mood of despair and stark austerity.

From the outset, Liszt knew that his Années de Pèlerinage was unlikely to appeal to the masses. In his own words, the work was ‘written for the few rather than the many – not ambitious of success, but of the approval of that minority which conceives art as having other uses than the beguiling of idle hours, and asks more from it than the futile distraction of a passing entertainment’.

Louis Lortie's credentials for taking on this greatest of musical pilgrimages are self-evident from the start. The opening 'Chapelle de Guillaume Tell', from the Switzerland-inspired first book, is delivered with epic sweep and grandeur, wonderfully shimmering tremolos, and a huge tonal range.

Complete - and completely successful - traversals of Années de pèlerinage are relatively thin on the ground, This is one of them. Usually one or two pieces fall by the wayside but Lortie maintains a consistent level of excellence in performances that transcend the sterile surrounds of the studio.

His identification with Liszt's poetic message lends every bar an unimpeachable emotional authenticity and, conceptually speaking, these are strikingly original interpretations, without a trace of received wisdom. In a word, this fresh and vital Années de Pèlerinage is quite unlike any other.

Technically he is, as one might expect, immaculate. This is, in many respects, no-frills Liszt, very masculine and carefully steering clear of self-conscious sentiment or souped-up passion...This is not to say, however, that Lortie misses Liszt's poetry. Les Cloches de Genève, for instance, is about as exquisite as it gets, and he's also notably strong when it comes to dealing with the sensuousness that informs Liszt's religious sensibilities.