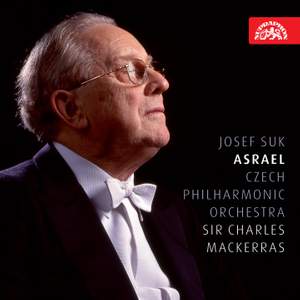 Asrael encompasses formal experiment, superb orchestration, a magnificent grasp of scale and, above all, an unerring feel for catharsis...Charles Mackerras's performance encapsulates all of these... — BBC Music Magazine, May 2011, More…

In one of his last performances with the Czech Philharmonic Orchestra, the late Sir Charles Mackerras conducts a magnificent account of the underrated 1906 symphony, composed in memory of Suk’s mentor and father-in-law Dvořák.

Josef Suk began writing the funeral symphony Asrael to commemorate his teacher and father-in-law Antonín Dvořák. During the course of work, however, Fate dealt him another crushing blow: Asrael, the Angel of Death, took away Suk’s wife and Dvořák’s daughter, Otilie. The symphony is a story of a suffering whose strength seems simply unendurable, yet also a story of its overcoming, seeking solace and hope.

Sir Charles Mackerras’s live recording of Asrael originated on a Good Friday, 6 April 2007, one hundred years after the symphony’s premiere. The Australian conductor had first heard about the Asrael some sixty years previously from Suk’s close friend, Václav Talich. In later years Mackerras confessed that he perceived the work in a completely different light after his daughter had died. Sir Charles conducted Suk’s Asrael during one of his last performances with the Czech Philharmonic Orchestra. It is also his last previously unreleased recording with this orchestra.

Asrael encompasses formal experiment, superb orchestration, a magnificent grasp of scale and, above all, an unerring feel for catharsis...Charles Mackerras's performance encapsulates all of these qualities...Not only does he see the staggering originality of Suk's vision, but, effortlessly, he folds into his interpretation the depth of his knowledge of the Czech repertoire...this is the closest to the definitive version we have.

The Czech Philharmonic’s live performance breathes a conviction and beneath-the-skin rapture that you won’t find in any other recording.

There are so many moments that come memorably to life in this reading...the driving energy of Mackerras's conducting is thrilling, and the combination of clarity and warmth that he finds in Suk's orchestral textures comes across impressively...it's quite simply the greatest performance I've ever heard of Asrael

Mackerras has the advantage of an orchestra that has lived and breathed this music for 100 years — it was premiered exactly a century before these concerts — and his own deep involvement with Czech music gives him persuasive insights.

Mackerras's performance has a wonderful objectivity about it, as well as a quiet intimacy in the more reflective moments. Superbly played, it's a perfect demonstration of why Mackerras was a great conductor, and of his ability to bring the best out of whoever and whatever he was conducting.